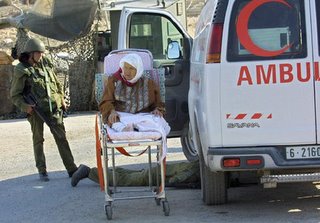 Nobel Prize winners who oppose the proposed Academic Boycott of Israel being debated this weekend by the British lecturers'union Natfhe write:

"The primary value of the scientific community is pursuit of understanding through free and open discourse. The clarity of that beacon to humanity should not be compromised for transient political concerns." Frank Wilczek (physics, 2004), Massachusetts Institute of Technology

"Scholars have the great privilege - and duty - to set a much-needed example of human solidarity and co-operation." Walter Kohn (chemistry, 1998), professor of physics at the University of California, Santa Barbara

I am all choked up. "Transient political purposes?" What about Najah Al Sadak's "humanity"? She was in labor this morning, Israeli storm troopers shot at the ambulance she was in, forced her to sit on the ground, and detained her for several hours?

With whom does Professor Walter Kohn "co-operate" and express "human solidarity"? Obviously not with "federations and associations of academics and professionals and dozens of civil society institutions in Palestine," who have called upon the the world community to boycott, sanction, and divest from Israel.

No, obviously not with the occupied; where are the lofty words from Kohn and the seven other Nobel laureates, who so vociferously defend the freedom to discourse with the oppressor, but say nothing on behalf of the occupied Palestinians, who due to economic sanctions, which include the withholding of their own tax revenues by Israel, haven't been paid in several months?

The Palestine International Press Center reports that twelve universities and schools have been closed since September 2000, 1125 high educational associations have been suspended, and 350 institutions of the Ministry of Education "were subjected to Israeli bombardment."

The Wall is currently being constructed through the middle of Anata Secondary school's playground and Israeli soldiers teargassed the recent graduation ceremony. School children in Hebron must be accompanied to and from school because of assaults from fanatical Jewish settlers.

My question for the esteemed laureates:

What is left to the Palestinians?

Protesting peacefully? On May 19, seventeen peaceful protestors in Bil'in, including Palestinians, journalists, and internationals, were wounded by rubber coated metal bullets.

Asking politely? Shehda Muheissin, 51, with documentation of a medical appointment was delayed at an Abu Dis checkpoint. When he attempted to pass he was beaten in the head and died after suffering a heart attack.

Sadly, for a people starved both physically and of their civil, legal and human rights, the only discourse our esteemed Nobel laureates manage is on behalf of a ruthless and oppressive regime.