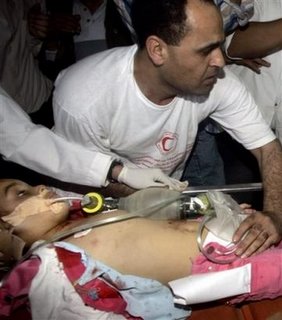 Rima Merriman reports that a few days ago two brothers were killed, one killed as he was trying to protect the other.

"To kill them, the Israelis first sent a force disguised as Arabs (a tactic they use often) to blend in with the population and relay advance information. These informants were then backed up by more than 100 fully equipped soldiers with tanks and helicopters — a grotesque use of force given the defencelessness and unwariness of their targets. On the Palestinian side, there were young activists in the various Palestinian factions, aspiring to resist their occupation.

"When the operation in Jenin and Qabatiya was all over, the Israeli soldiers who had chased and slaughtered these six men no doubt tore back to their base high-fiving and congratulating themselves on their “victory”, discussing the fine points of their hunt, the dumbness and poverty of their cornered prey and the skill with which they executed their little pathetic exercise.

"Once targeted, Palestinian youth do not have even a sporting chance. Considered “lawful targets”, they might as well be unarmed gladiators pitted against all manner of wild beasts. The Israeli supreme court routinely puts the stamp of judicial approval not only on this kind of extrajudicial killing of Palestinians but also on various schemes whose ultimate goal is to control demographics and to seize Palestinian land and resources."