'Every Palestinian...together at the same place' 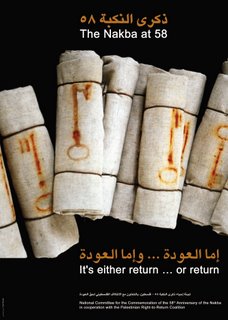 
"Palestinians are reclaiming their past - of the nakba and dispossession - and at the same time preparing the next phase of their fight for justice. By some miracle of the general will, every Palestinian has somehow, through different journeys, arrived together at the same place," writes Karma Nabulsi in today's Guardian.

"A recurrent theme, however, even among the most compassionate, was the assertion that, in resolving issues between Palestinians and Israelis, 'We cannot go back to the past,' and indeed, that we Palestinians must forget the past.

"It struck me as ironic that such an admonition could issue from people whose claimed attachment to Palestine goes back 2,000 years. What this says is that who can remember, and who can be made to forget, is fundamentally an outgrowth, and an enactment, of power.

"Viewed in this way, our remembering, is a form of continuing resistance to the defamation and erasure of our history.

"But remembering Talbiyeh [Bisharat's boyhood home] of the pre-1948 period is more than a form of resistance. Recalling that era, and the people it produced, involves envisioning a possibility for another future. Talbiyeh was a place of tolerance, compassion and enlightenment, its sons and daughters cosmopolitan, broadminded and welcoming.

"In recalling and claiming this heritage, we are also promising that when Israelis are ready to recognize Palestinians in their full humanity, as no lesser beings than themselves, we will be there, in all our ingenuity, imagination, strength and, ultimately, even love.

"To forget this rich legacy, then, is to deny our humanity, to negate our identity and to abandon a future in which Christians and Muslims are equal to Jews," writes George Bisharat.

"The plain fact is there shall be no peace in the Middle East without the return of the refugees to their homes," writes Dr. Salman Abu Sitta.

"UN General Assembly Resolution 194 is not an invention; it is an application of international law. That is why it has been confirmed by the UN 135 times, a unique case in UN history. It is also derived from the UDHR and the European, American and African similar conventions. It is also derived from the sanctity of private ownership which cannot be extinguished by passage of time, occupation or sovereignty," he writes further.

In addition, the conference recently concluded on May 6, held in Malmo, Sweden, which included five thousand participants:

"Reaffirmed the decisions taken in London, Berlin and Vienna concerning adherence to the right of return. They warned of the dire consequences of attempts to undermine or jeopardise this right. They demanded the urgent implementation of this right in a manner that would enable the Palestinians to return to the homes from which they were forcibly expelled. The conference asserted that the refugees must be afforded due compensation as a result of all the physical and psychological losses which they and their descendents have suffered throughout the years of exile." Palestine Return Center

"In 2005, young Palestinian activists helped to organise more than 100 meetings in refugee camps and exile communities in more than 28 countries. The idea was to bring Palestinians together - whether under occupation or in exile - to discuss the things they want to do next. I participated in many of these gatherings and witnessed the promise of this generation replicating something they have no first-hand experience themselves, for it is rarely talked about and is as yet unwritten: the secret history of the previous generation of Palestinian resistance activists and fighters. Their current endeavours echo the same practices, the same spirit, and the same direction." Karma Nabulsi

"On Saturday 13 May, the Union of Youth Activity Centers-Palestine Refugee Camps (UYAC), Zochrot and Badil invite the public to take part in the first 'Lifta Marathon', an event organized in the framework of the 2006 commemoration of the Palestinian Nakba. Participants will depart from Palestinian refugee camps, Jerusalem and Tel Aviv. Palestinian families from Lifta will carry the keys to their homes and hand them over to those able to continue across the Israeli military checkpoints to complete the symbolic return. A small ceremony in the old village center will be held between 11:00 – 13:00 when Palestinian families from Lifta will convey their testimonies and memories. An art corner for children will be provided throughout the event. This year's return to Lifta will conclude with a collective effort at clearing the garbage dumped in the Palestinian homes." Badil Resource Center for Palestinian Residency and Refugee Rights