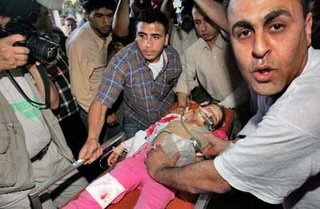 All my pretty ones?
Did you say all? O hell-kite! All?
What! all my pretty chickens and their dam
At one fell swoop?...
I cannot but remember such things were,
That were most precious to me.
Macbeth

UPDATE: This just in from Palestine Human Rights Center, Gaza on the willful killing by an IOF soldier of Subhi Abu Musallam:

"In the West Bank, IOF willfully killed a Palestinian woman inside her house in Balata refugee camp, east of Nablus.

"According to investigations conducted by PCHR, at approximately 01:00 on Sunday, 21 May 2006, IOF moved into Balata refugee camp, east of Nablus. They took position at the entrance to the al-Jammasin quarter in the center of the camp. At approximately 04:15, Subhi Abu Musallam, 50, left his house to go to work in the vegetable market. When he saw IOF positioned in the area, he decided to return home. His wife heard footsteps approaching the house, so she went to the second floor and looked through the window to check that it was her husband coming back home. As soon as she looked through the window, an IOF soldier willfully shot her dead with a live bullet to the head. According to Palestinian medical sources, the bullet that hit the victim was of an explosive nature."

Predictably, the coverage of the deaths of three generations of the Palestinian Annen family didn't merit a headline in either the New York Times or the Washington Post. The Washington Post, however, did headline prominently on its online edition the fractured leg of Barbaro, "Favorite Fractures Leg at Preakness."

The first mention of the three generations of one family killed is in paragraph 15 of the story "Palestine Intelligence Chief is Badly Wounded in Bombing" in the world section of the New York Times. Incredibly, a rocket that hit an empty Israeli classroom merits a headline in the Washington Post. The death of a Palestinian woman in Balata Refugee Camp early Sunday morning is mentioned in paragraph 7 of the same story. In a side box on the same page the last headline reads "Palestinian Woman Killed in West Bank Camp: Witnesses."

Further details are provided by Maan Independent News Service: "Palestinian medical sources say that the woman was shot in the head by Israeli soldiers." Maan also informs us that she was the mother of three.

Contrast this to paragraph 1 the Reuters story in the Washington Post:
"A Palestinian woman was killed on Sunday in Balata refugee camp in the West Bank in a shooting that witnesses blamed on Israeli soldiers in the area, a charge the army said initial reports deemed mistaken."

The BBC's report of the mother's death is reprehensible.

"Witnesses told the Reuters news agency she was shot dead by Israeli soldiers - but Israel said its reports indicated none of its soldiers had opened fire.

"Palestinian witnesses said the woman, 48, was shot by an Israeli patrol while trying to help her husband find a route home that avoided the troops.


"Civilians often die in crossfire between Israeli and Palestinian forces."

For a description of Palestinian "forces" see Rima Merriman's story here to find out just how ridiculous this "balancing" is.

" An army spokesman confirmed Israeli troops had been in the area but told AFP they had not opened fire.

"According to the AFP news agency, the woman, named Aisha Abu M'Salaam, died in an exchange of fire between Israeli troops and Palestinian gunmen."

Contrast this to further details provided by Maan

"The sources added that Aesha Abu Mosallem was killed while she was standing on her balcony, as the Israeli soldier shot her directly in the head."

And while the Washington Post provides coverage for rocket attacks on empty Israeli classrooms, there is no coverage for Naji Akram Masri, 17, who "was seriously injured by splinters" from Israeli artillery rockets that hit him in the stomach.

Yahoo's Middle East News Page for May 21 also carries no headline about the three generations of a Palestinian family killed in one fell sweep, but headlines the rocket that fell on an empty Israeli classroom.