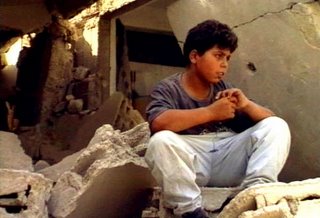 Ala, nine years old, atop the rubble of his demolished house

Ala when he led the resistance in Jenin, a few months before his death

"American aid to the Palestinian people must be predicated on their rejection of terrorism." Congressman Tom Delay, May 22, 2006

Arna's Children presents a microcosm of life and death in a Palestinian refugee camp, Jenin. Naji Al-Ali's Handala, the barefoot boy whose back will remain to the world until he returns home, the archetype for Ashraf, Ala, Yousef, Nidal...the children of Jenin who transition from young actors and artists to resistance fighters of whom, Juliano Mer Khamis, Arna's son, said, "Praised be the fighters, for they die in their war for freedom and not by selling it." Arna is the woman who coached the children in theater from 1989-1996. Her son, Juliano, filmed the children during this time and later, after his mother's death in 2002, right after the battle of Jenin.

The film is profoundly moving. More powerful than even poetry, the images offer a glimpse into the heart of darkness courtesy the enforcers of the toxic Zionist ideology. "These youngsters had seen death camping over their camp since their childhood with no intention to leave," writes Hani Salloum.

Ala is presented in the beginning of the documentary in 1989, nine years old, dazed, sitting atop the rubble of his demolished home. His friend and next door neighbor Ashraf's home was the intended target; Ala's the "collateral damage." Rather than join the drama activity, Ala paints. He paints a house with a Palestinian flag on it. Ala later becomes a leader of the resistance, survives the battle of Jenin, only to be killed shortly after in a "targeted" assasination on November 26, 2002, two weeks after his son was born.

Ashraf died defending his town from Israel's Army; we see the body of the boy who wanted to be the Palestinan Romeo, wrapped in a white shroud. He was with Ala, defending their camp in their position from holes they'd knocked out in the walls of the upper floor theater of their childhood.

Yousef says, "On stage I can tell people what I want and how I feel." For a few brief years, in an impoverished refugee camp, Arna's children were able to express their wants and feelings through art and drama.

Yousef's friend who did not become a fighter says that Youssef was never the same after a nine year old girl Reham Wared died in his arms. "Quickly, he jumped over the school fence looking for a shelter from another threat: an angry tank approaching him. As he breathed heavily he stuck to the wall and closely watched the opening of the moving cannon. And the tank fired a shell. Riham Abu-El-Ward, a 9- year old girl, who hid under the staircase, was thrown a distance and hit the entrance gate. Youssef jumped towards her, while screaming and pushing away the curious onlookers. Riham was still. Her limbs were scattered in all directions. He collected her to him and walked slowly and strangely towards the hospital."

A week later in 2001 Yousef and Nidal went on a suicide mission.

One of the few negative reviews stated that Arna's Children lacked context. Similar to the wall of words Jehuda Reinharz, Brandeis Presidient threw up at Brandeis' graduation in reference to the removal of refugee children's art because it 'confused' and 'upset' some upper middle class Jewish students:

"At Brandeis we believe that art can educate, inspire and stir healthy and constructive debate, and can best serve those purposes in a university context if it is accompanied by thoughtful contextualization and recognition of multiple perspectives."

Contextualize this: A mother who has lost all but one of her sons fighting Israel's occupation forces. A nine year old girl blown to bits by a tank shell targeting her school. A poor nine year old boy, dazed, sitting atop the rubble of his demolished house. Youssef's little sister, who has stopped talking, since the occupation forces took her brother away from their house. How much longer must Palestinians pay in blood for Zionist denial? If it is too much too expect Zionists to own up to their crimes against humanity, then they must be coerced through boycott, sanctions, and divestment.

A brief clip of Arna's Children is here and the memorial website is here.