Aliya Arlene and Abu Zaheer: Where is the Justice? 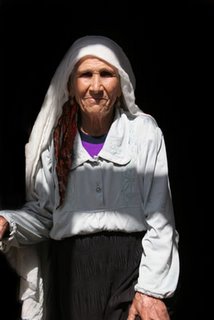 "In 1948 the heart of our family was torn out, and the center of our existence was broken . . . Though we have lived well and done well, and accomplished much, since 1948 we have been outsiders - not only my parents, but their children, and, I fear, their children's children as well." Jean Said Makdisi

Israel's "right of Aliya" states that every Jew has the right to come to Israel and become a citizen.

But Israel violates the Universal Declaration of Human Rights which states that
everyone has the right to leave any country, including his own, and to return to his country. What this means is that Father Audeh Rantisi, whose family was expelled from Lyda in 1948 and whose roots go back 1600 years may not return to the place of his birth but any Jew from all over the world with no physical ties to the land may go to historic Palestine. Below is an excerpt from Father Audeh's story:

That second night, after the soldiers let us stop, I wandered among the masses of people, desperately searching and calling. Suddenly in the darkness I heard my father's voice. I shouted out to him. What joy was in me! I had thought I would never see him again. As he and my mother held me close, I knew I could face whatever was necessary. The next day brought more dreadful experiences. Still branded on my memory is a small child beside the road, sucking the breast of its dead mother. Along the way I saw many stagger and fall. Others lay dead or dying in the scorching midsummer heat. Scores of pregnant women miscarried, and their babies died along the wayside. The wife of my father's cousin became very thirsty. After a long while she said she could not continue. Soon she slumped down and was dead. Since we could not carry her we wrapped her in cloth, and after praying, just left her beside a tree. I don't know what happened to her body.Father Audeh Rantisi, brutally deported from Lyda, at 11 years; his family had lived in Lydh for 1600 years.

A witness to the aftermath of the 1982 Sabra-Shatila massacre engineered by Ariel Sharon:

What will always stick in my memory is of a little boy that had come from the camps, and his little body had no limbs.

I can remember just holding him, holding his little body close. He was covered with blood and the life was running out of him. He was crying for his mother.

Here are some accounts from Jews who recently made their way to historic Palestine, seemingly unconcerned that ninety two percent of the country to which they've immigrated is stolen from the indigenous population, seemingly unconcerned that their ideology is a toxic and immoral one that has imprisoned, maimed, strangulated, and slaughtered Palestinians for one hundred years. If they had one shred of decency they would hotfoot right back to the yuppie neighborhoods from whence they came. Theirs is a racism that is seemingly acceptable now, just as the Ku Klux Klan was once a respectable outfit.

New Jersey born and bred and a resident of Maryland for several years, I have been living in Jerusalem since shortly after my arrival in Israel.

At Israel Hitech this is what we do for you if you make Aliyah:
- We conduct the tedious searching process on your behalf
- We keep you abreast of our progress at all times
- We focus on finding a suitable professional challenge to match your qualifications
- We set up interviews with potential employers at your convenience
- We update you on what's new with Israeli high-tech compensation packages and help you through the decision making process

If you're indigenous to the region this is what we do for you:
-forbid you to live anywhere in your historic homeland even if you marry a citizen of Israel
-uproot 1100 olive trees that belong to the villagers of Qalquilia who depend of their orchards as their main source of livelihood
-shoot peace activists in the head
-shoot mothers in the head
-kill three generations of a family in one fell swoop
-throw schoolchildren in thornbushes
-blow up a sixth century church
-steal your land; move our people on it illegally
-plunder, pillage, desecrate, ancient villages

From Abu Zaheer, a refugee in Rafah reflects:

The people of our village (Yebna) realized too late the guests we allowed were in truth gangs of occupiers, armed with British guns and weapons. We had the tools of farmers, axes and scythe for harvesting as weapons. Yet we resisted, creating sand barriers and obstacles in attempts to protect our homes." he begins.

"In our village, rather than attack us, they lay siege, surrounding our village on three sides with the fourth flank left open for the British tanks that showered our village with canon fire day and night. The power of the tanks, we were no match for this. We were kicked out from our homes beginning with Yebna, then Al Isdud, Al Majadal and here. Ultimately we ended up in Gaza. Here we live since 1948 in this refugee camp, supported by the donation of the United Nations.”