Israel's Silent Holocaust Against the Palestinians 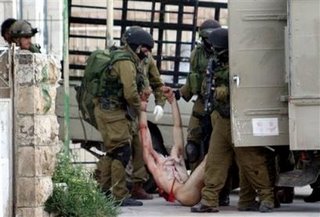 While Israel commemorated the “holocaust” on 25 April, the Israeli state, through its army, paramilitary police forces and armed settlers were carrying out a silent genocide against the helpless Palestinian people, aimed primarily at killing, maiming and tormenting as many Palestinians as the “current international atmosphere” would allow.

This genocidal onslaught, while slow in motion and lacks the melodrama of a news-breaking huge slaughter, is non the less pushing millions of innocent men, women and children to the brink of disaster.

Indeed, the Israeli occupation army, a Jewish Wehrmacht by every conceivable standard, continues to kill and maim an average of ten Palestinians per day. Thus, since the beginning of April, the Judeo-Nazi army murdered as many as 35 Palestinians and badly wounded over sixty others.

In addition to the dead, there are numerous other Palestinians who lose their eyes, or vital organs of their bodies and become physically disabled for the rest of their lives, thanks to Israel’s random and indifferent bullets.

In fact, the all-out Israeli onslaught against the Palestinian society endangers the personal safety of every Palestinians from the nursery children to college students to teachers and hospital workers and the ordinary people in the streets. It is an open asymmetrical war on a civilian population for no reason other than them being non-Jews.

In other words, the Palestinians are being targeted and killed and savaged and brutalized, not for what they do, but for who they are.

The killing and maiming, non the less, are but a small part of what Israel is doing to the Palestinians amid a deafening silence by western countries, including Europe and the US, and nearly total impotence from Arab countries.

Some people, especially in the West, might instinctively dismiss the Nazi epithets describing Israel’s criminal practices against the Palestinians.

However, an honest appreciation of what is happening in the West Bank and Gaza these days leave no doubt as to the genocidal nature of Israel’s systematic reign of terror against the Palestinians.

To begin with, the Israeli army is besieging nearly all Palestinian population centers, including villages and refugee camps, preventing Palestinians from accessing work and food, not only in Israel proper, but also in neighboring Palestinian areas.

For example, Palestinians living in the northern West Bank, like Jenin for example, are barred from traveling southward to Ramallah.

This means that Palestinian farmers in the northern region of the West Bank can’t market their agricultural produces in the rest of the West Bank. In other words, these poor farmers will lose the source of their livelihood and ultimately join the swelling ranks of the poor..

Similarly, Palestinians living in the northern Jordan Valley are not allowed to travel outside their immediate places of residence and those succeeding in leaving won’t be allowed to return homes.

Last month, the Israeli occupation army turn the so-called Qalandia Checkpoint into an “international border-crossing.” The same has been done with the Z’atra checkpoint outside Nablus, and more of the same is in the offing.

These are not security measures as Israel would want to believe. This is a well-thought plan intended to turn Palestinian population centers into miserable and hapless detention camps that bear a striking similarity to Nazi detention camps with the only difference being the absence of ovens and gas chambers.

However, people are made to suffer and are killed without ovens and gas chambers.

Palestinian homes and neighborhoods are raided in the quiet hours before dawn on a daily basis by Gestapo-like Israeli soldiers, many of them come from Jewish settlements in the West Bank.

And during a given raid, the Jewish savages terrorize children, beat husbands before their wives and children and deliberately vandalize property, including TV appliances, and provocatively mix food stuff , like sugar and salt, in order to make it unusable.

Moreover, the mass arrest of Palestinian youths is no longer security-related as Israel was claiming until recently. Now, young men, between the age of 15 and 45, are detained for many months and years for the sole purpose of impoverishing their families and weakening societal productivity and economic viability.

Needless to say, the arrest and indefinite incarceration of Palestinian breadwinners, without charge or trial, will have harsh consequences on their families who would be forced to seek food from the already bankrupt charities, exhausted by sweeping American and European sanctions.

This sinister coercion and savaging of an entire society can only push people to the edge and convince them that the way of suicide bombing is the right path. How else people facing such circumstances would think?

This is not all. The Israeli state has decided of late to withhold all Palestinian tax money (I am talking about hundreds of millions of dollars), which makes it impossible for the Palestinian government to pay salaries for over 150,000 Palestinian public employees and civil servants. Needless to say, up to one third of Palestinians in the West Bank and Gaza depend for their income and livelihood on these meager salaries which average no more than $500 per month.

This sweeping, collective punishment of the Palestinian people for exercising their democratic right and electing the Hamas movement should be viewed as no less than a crime against humanity.

This is exactly what Third Reich and Nazism did to their victims. They starved them to death. And Israel is doing the same thing, although not as brazenly.

Europeans and Americans! Don’t raise your eyebrows too much. Israel is behaving like the Nazis. Israel is closing our towns, preventing us from traveling within our own country and moving from one city to the other, preventing us from accessing work, preventing us from importing and exporting vital commodities, and hunting us down with helicopter gunship and Abram tanks as is the case in northern Gaza. Don’t your envoys and ambassadors and other observers communicate to you what is happening here?

Well, if they don’t, it is a calamity, and if they do, and you ignore their reports, it is even a greater calamity.

Or should the Arabs and Muslims in our part of the world put their trust only Osama Ben Laden and Abu Mus’ab Zarqawi?

We are blaming you because it was you who created Israel in the first place, by superimposing it upon us, as if we were children of a lesser God.

It is therefore your responsibility to see to it that your brat doesn’t metamorphose into a fully-fledged Nazi monster.