Bullet in the right eye 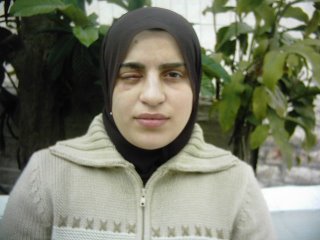 The original of a "somewhat milder" version in Al-Jazeera.

By Khalid Amayreh in the West Bank

When Ruba Mahmoud Awayes left her home in the small village of Nus Jbeil, outside Nablus, for college recently, she never thought she would return home a few days later with only one eye.

Yet, this is exactly what happened to the 21-year-old college student, who painstaking recounted her nightmare to PT.

“My friend and I were leaving campus on Sunday, 9 April, and walking toward the taxi cabs that would take us to the village. Suddenly, I felt a strong object smacking my right eye. I felt my entire head exploding. I didn’t know what was happening to me, I collapsed and found myself in the Rafidia hospital,” says the 3red year IT student.

“There were no soldiers, no military vehicles, nothing, no helicopters hovering above. It was as if the bullet came from nowhere. If I had known there was shooting , I would have docked it or moved to a safer place or returned to campus.”

Ruba said she didn’t know if the soldier who shot her did it deliberately.

“This is irrelevant. They knew damn well their bullets would hit somebody, and that was ok for them as long as the victim was a Palestinian. It doesn’t matter if he or she is innocent or not. The important thing for them is to kill or maim or cripple a Palestinian.”

At the Rafidia hospital, doctors soon found out that the 21-year-old student had just lost her eye as a result of a rubber-coated bullet. They called her father in the village, telling him that his daughter was seriously wounded in the eye and that she ought to be transferred immediately to the Saint Johne's eye hospital in East Jerusalem for an operation called “evisceration.”

Devastated by the bad news, the distraught father, Mahmoud Awayes, didn’t know what to do as he possessed no permit from the Israeli army to enter Jerusalem. Still worse, an Israeli army roadblock was erected at the entrance to the village where soldiers were preventing any body from leaving. Eventually, the family contacted a relative who is living in Nablus and got him to accompany Ruba to Jerusalem.

Arriving at the Saint Jones eye hospital, doctors decided to operate on her immediately.

“We found that her entire eye was smashed by the impact of the bullet, everything was smashed, the cornea, the retina, the internal blood vessels, the entire eyeball was smashed,” said Humam Shomali, the treating ophthalmologist.

“We had no choice but to eviscerate her entire eye, which we did. We also placed a polystyrene ball in place of the eyeball.”

Ruba’s father, Mahmoud Awayes, complained that, with the Israelis being judge and enemy at the same time, there was virtually no hope for justice, even a semblance of justice, for his daughter.

“These soldiers were behaving like the Gestapo. They were shooting randomly in all directions. In the past, the occupation army would impose a curfew before starting shooting at everything moving. Now, they just shoot and kill and maim, just like this.”

Awayes said he didn’t receive even an apology or acknowledgement of responsibility from the Israeli army for “shooting my daughter and smashing her eye.”

“You see we are simple people. We don’t know what to do. We only raise our hands heavenward so that God will get us justice from these savages (the Israelis).”

Awayes is particularly frustrated because the incident was ignored by the bulk of western and even the Arab media.

“Imagine if a 21-year-old Jewish student had her eye smashed how her story would be carried by all American media and European media to underscore Arab brutality. You see the hypocrisy and double-standards. Do they think that we are lesser human beings, insignificant, expendable? Is this the civilization they are bragging about?"

This week, at the initiative of some friends and family members, Awayes contacted a number of human rights groups operating in the West Bank, including the Israeli human right organization, B’tselem and Physicians without Borders.

He said he would try to seek justice, “not so much because I want to get compensation from the Israelis, but in order to show them that we are not children of a lesser God.”

However, when talking to aljazeera.net, Awayes appeared despondent and utterly despairing of the prospects of getting real redress from the Israeli justice system.

“It is very hard to receive justice from a state that murders children and lies about the murder. What can you do when the judge is your enemy?”

It is really difficult to prove the man wrong. PT contacted the Israeli army to inquire about the incident only to be told that the army was not aware of “the incident.”

The indifferent tone of the army spokesman probably underscores the ease with which Israeli soldiers shoot Palestinians, a fact that has been consistently reported by human rights organizations and even by the Israeli media.

On Monday, 17 April, just 8 days after Ruba lost here eye, Israeli soldiers, who had earlier taken over a Palestinian home in downtown Nablus, opened fire rather indiscriminately on school children, killing one boy, Mamdoh Obeid, and wounding 16 others, including one who was hit with a bullet in his neck.

An Chilean member of an international peace volunteering group, named Maria, testified that the kids were just watching the soldiers.

Meanwhile, Ruba says she will try to be strong and face the “new reality” with serenity and courage.

“I am, of course, angry, to say the least, but I want allow this to ruin and cripple my life. I will return to college in a few weeks. Life must go on and I will not sit down at home lamenting my bad luck. I will not look for mercy from anybody. I will keep going as if noting had happened to me.”

Asked what she would tell the soldier who had shot her if she were to meet him, Ruba said “I wouldn’t want to meet or see him. He must be too inhuman to talk to.”

Shomali said Ruba would undergo another operation within a few months to install an artificial eye for her.

Asked how many people he though lost their eyes this way, Shomali said many.

“Now it is not very many. But in the heydays of the intifada, we used to received at least two or three people per week."