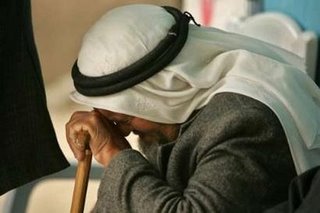 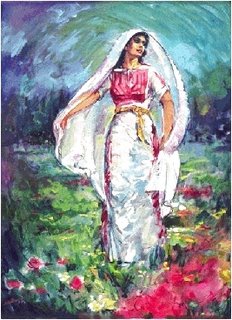 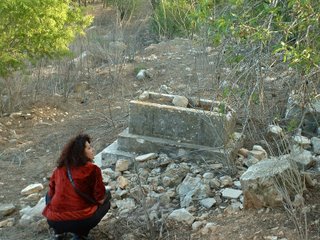 From William Wordsworth's "Tintern Abbey":For I have learned
To look on nature, not as in the hour
Of thoughtless youth; but hearing oftentimes
The still, Sad Music Of humanity,
Nor harsh nor grating, though Of ample power
To chasten and subdue. And I have felt
A presence that disturbs me with the joy
Of elevated thoughts; a sense sublime
Of something far more deeply interfused,
Whose dwelling is the light Of setting suns,
And the round ocean and the living air,
And the blue sky, and in the mind Of man;
A motion and a spirit, that impels
All thinking things, all objects Of all thought,
And rolls through all things.

From Gideon Levy:But even if they have bags Of flour and rice, the living conditions Of the Palestinians are chilling. They live in prison. Their daily routine includes humiliation that is no less terrible than malnutrition. Anyone who has to beg for permission to leave his village, to spend hours crowded in line at a checkpoint just to reach his destination, anyone whose bedroom is brutally invaded in the middle Of the night by the occupation army, whose time and life is considered valueless, and whose basic human dignity has been trampled into dust, cannot find any consolation in the fact that flour and rice is available.

April 9th, as hopeful spring growth opens blossoms every where and winter's chill dissipates into beautiful days, you report "Israel Steps Up Military Action in Gaza Strip", accidentally marking the anniversary Of the Deir Yassin Massacre that helped shaped the Israel we know today. A nation shaped by political Zionism aggressively terrorizing and killing the native non-Jewish population Of the Holy Land.

In 1948 "Members Of the underground Jewish terrorist group, the Irgun, led by Menachem Begin, who was to become the Israeli prime minister in 1977, entered the peaceful Arab village of Deir Yassin, massacred 250 men, women, children and the elderly, and stuffed many of the bodies down wells. There were also reports of rapes and mutilations. The Irgun was joined by the Jewish terrorist group, the Stern Gang, led by Yitzhak Shamir, who subsequently succeeded Begin as prime minister of Israel in the early '80s, and also by the Haganah, the militia under the control of David Ben Gurion. The Irgun, the Stern Gang and the Haganah later joined to form the Israeli Defense Forces. Their tactics have not changed." (by William Martin) http://www.palestinecalendar.org/april.htm

Palestinians, the indigenous population of that place so many call the Holy Land, have been planting, tending and nurturing gardens and orchards for hundreds and hundreds of years. But the beauty they build keeps getting pulverized by Zionist terror. When do we say ENOUGH ! Israel stop uprooting and destroying all that is right and good !

Suad Amiry:As you know, the olive tree is the life-line of Palestinian agriculture. Around the cultivation of the olive orchards an entire way of life evolved through centuries. The wholesale destruction of our olive and fruit orchards is destroying the very face of Palestine and is aimed at destroying our capacity to resist as Palestinians as sons and daughters of this land.

Tom Hurndall: 9 April 2003
Written two days before he was shot

My second night and things seem 'easier'. Indoors now, but no further from danger. To begin with, there is an Israeli tank less than 20 metres from my bed, that was parked there two weeks ago and has only left to be replaced each morning. The room next to mine has several large caliber [sic] bullet-holes in each wall, many of them having travelled through the brick.

PCHR is gravely concerned over the latest escalation in attacks on the Gaza Strip by IOF. Over a 36-hour period this weekend, the Gaza Strip witnessed the highest rate of fatalities than any other time since the implementation of the Israeli Disengagement Plan in September 2005.

Percy Bysshe Shelly: If winter comes, can spring be far behind?