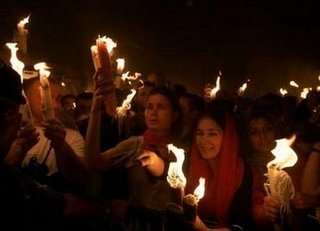 The headline includes greetings Orthodox Christians repeat over and over during Easter, which will be in less than two hours in Germany. Unfortunately, we won't have the candle lit midnight liturgy because the itinerant priest we share with other German towns can't get to us until Sunday morning at 11:00. And I hope that US Christians understand that Palestine's Christians are the first Christians, or the original "stones," as they are sometimes referred.

In Arabic the greeting is "Al Maseeh Kam," and the response is "Hakkan Kam!"

In English the greeting is "Christ is Risen," and the response is "Truly He is Risen."

In Greek: "Christos Anesti," and the response "Alithos Anesti."

Each Easter the greetings, often in many languages, for churches which haved mixed ethnicities, are exchanged with a spirit of joy and elation; this special feeling, which approaches exhilaration, doesn't occur at any other time of year. For Orthodox Christians, Easter is more important than Christmas.

For the greeting in other languages:

I'd like to thank my friends and acquaintances, Christian, Muslim, Jewish, and those who adhere to other beliefs for their prayers during this time. The prayers worked. On Monday of Catholic Holy Week, my third daughter, who is twelve, had a very bad accident from which she suffered internal injuries. She has recovered beautifully, and I know that it was because of everyone's prayers and I am eternally thankful for all of you who prayed on behalf of my daughter. This is an Easter which I will cherish forever.

But very sorry to read this about IOF's Holy Saturday assault on worshippers.