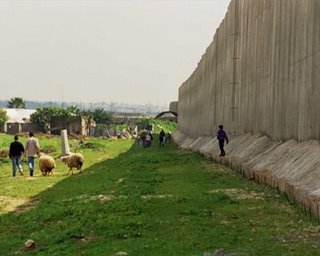 Declaration issued by the Popular Front for the Liberation of
Palestine on the Thirtieth Anniversary of the Day of the Land.

To the masses in the land of Palestine and the Arab world!

Since the Sykes-Picot agreement was signed in 1916 Arab land has
been subject to partition and expropriation. Since the first
Zionist invasion, the people of the Arab Nation have struggled and
fought for their independence and unity and for the integrity of
Arab soil. In the course of this colonial invasion and with its
absolute support, the Zionist movement strove to uproot and scatter
a whole people from their land and seize their possessions under the
mendacious slogan "a land without a people for a people without a
land." Thus the issue of the land and sovereignty over it has
become the pivot of a struggle that has lasted for more than a
century between the one whole nation and a racist colonialist
project backed by the forces of renewed colonialism. After being
partitioned, Arab land became the object of many plans for parceling
it out and occupying it, and what is taking place in our beloved
Iraq today is but one example of this, though undoubtedly it will
not be the last. Thus, the Day of the Land is no longer a day for
Palestinians; it has in actuality become an Arab day, in the face of
the dangers that now threaten all the Arab land.

Masses of our people and our nation!

Our people's uprising in Galilee, the Triangle, and the Negev thirty
years ago was but the latest chapter in the struggle of our people
to protect their land that had been going on since the dispossession
the Arabs of al-Hawarith, the expulsion of the residents of the
Negev, and the construction of the first settlements on Palestinian
soil. It was an _expression of the depth of the struggle and its
roots, and it was an _expression of the tenacious adherence of the
Palestinian people to their land and their steadfastness upon it,
regardless of however disadvantageous the balance of power was for
them. It was the will of a people embedded in the earth, fertilized
with the blood of martyrs, who cannot be overcome, and cannot be
prevented from carrying on their fight against racism,
Israelization, and Judaization until they gain their total freedom
and independence.

Our people, embedded in your land!

We observe the anniversary of the Day of the Land at a time when the
arrogant racist enemy opens our land to colonial settlement, to
racist division, and separation. The enemy applies its racist
hatred to the very soil of this land, to its stones, trees, and
people, without regard for international laws or the customs of
humanity. "More land, fewer Arabs" has become its favourite
slogan. To that end, the enemy is stealing the land of the Jordan
Valley, building racist roads, and demolishing houses in Jerusalem
and Lydda. It prohibits the extension of building areas in Arab
villages. It destroys the farm fields of the people in the Negev and
works to evict them. Yet in spite of all that, our people stand
steadfast, defending their land and their right to remain upon it,
deepening their ties to it, resisting all the racist calls for
eviction and deportation.

You who stand steadfast on the land of the martyrs!

An observation of the Day of the Land requires that we hail the
martyrs who fell for its sake. It requires that we salute the hands
that cultivate it, watering it with their sweat, determination,
remaining faithful to the struggle of our people by according the
land the utmost importance in patriotic work, whether in the sphere
of politics, economics, or society. Politically, it is necessary to
construct a comprehensive national plan to protect and defend the
land as a matter of national rights and sovereignty. Socially and
economically, it is necessary to follow a clear political course of
supporting Palestinian agriculture, national agricultural
production, and the farmers who constitute the guardians of the
land. Legally, it is necessary to pass a law on the land that
abrogates old regulations that facilitated confiscation and colonial
settlement building, one that guards the rights of citizens'
individual property, and relentlessly fights the policy of land
confiscation, Judaization, house demolition, and Zionist ethnic
cleansing policies.

To the masses of our people everywhere in the homeland!

On the Day of the Land we reaffirm our hold on our land as a matter
of our true sovereignty, and our clear line of upholding our
permanent legitimate right to the return of the refugees to their
land and homes, the establishment of our independent national state
on our national soil with Jerusalem as its capital. We affirm to you
that we uphold the line of resistance to the occupation, its
settlements, its racist wall, its roadblocks, and fascist
checkpoints, and we emphasize that any path other than that of
intifada, national steadfastness and resistance will lead nowhere
except a temporary state in which the enemy will expropriate more
than half the West Bank and deny us our Jerusalem as the permanent
capital of our state. We affirm to you that no occupation
government will give anything more than unilateral solutions aimed
at wiping out our cause, but that our national unity is all we need
to defeat the plans of Olmert and his masters. This unity must be
firmly laid down by a provisional national leadership on the basis
of a program built around common denominators, energizing and
constructing the Palestine Liberation Organization to represent
everyone on a democratic basis, inasmuch as it is the moral entity
that embodies the unity of our people and their struggle and is the
sole, legitimate representative of this people.

So glory to the martyrs of the land on their eternal day!

Glory to the hands that work and steadfastly guard the land!

Freedom to the prisoners!

By Resistance we will build our sovereignty on our land!