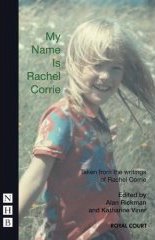 Corrie's story resonated with its audience.

Kara Young, 19, of Harlem, admitted that before the performance, 'I wasn't really aware of what was going on with Rachel Corrie.' Afterward, she said, 'I literally put myself in her position and felt like I was crushed by a bulldozer.'

Three years ago Rachel Corrie, a 23-year-old American peace activist was murdered. She sat down in front of a Palestinian home in Rafah attempting to stop its destruction by an Israel bulldozer. The bulldozer’s driver crushed Rachel, brutally ending her life.

As quickly as news spread about Rachel’s death, websites began publishing selections of her writings: emails to her parents and journal entries that included observations about her life and experiences.

Especially powerful were her vivid portrayals of daily life in Gaza. Those who read Rachel’s words were moved by the suffering she depicted, the fierce determination and passion for justice she displayed, and the hope she inspired.

It was not surprising, therefore, that a British theatrical group found merit in Rachel’s life and writings. They edited her emails and journal entries into a one-woman play, “My Name is Rachel Corrie,” which has, since 2005, had two critically acclaimed runs on the London stage.

“My Name” has yet to appear in the US and given recent developments the play may never be performed on a major US stage.
The New York Theatre Workshop, a progressive group long committed to producing innovative and controversial material, bid for, and won the rights to produce Rachel’s play in the US. It was to have opened on March 22, but submitting to unnamed “pressures,” the Workshop announced an indefinite postponement.

A few investigative press accounts have made it clear that the “pressures” that caused the Workshops to back off came from “pro-Israeli” sources. The explanations offered by theatre group officials have been either unconvincing or farcical.

At one point, for example, it was suggested that given Sharon’s illness and Hamas’s victory it would have been insensitive to perform “My Name.” On other occasions, Workshop officials said that given the controversial political nature of the play that they felt a need to either rewrite(!) “My Name” to provide a more balanced context or to hold off on performing it until they could present it alongside another yet to be written piece that focused on testimonies of Israeli victims of terror.

Prominent voices in New York’s artistic community have been shocked by the Workshop’s efforts to deny freedom of artistic expression to “My Name is Rachel Corrie.” They have expressed outrage at this awkward but still heavy-handed display over censorship.

In response, an outstanding group of artists and activists convened on March 22 at New York’s Riverside Church to protest the cancellation of the play. I was proud to have been asked to co-host the event with Amy Goodman, whose popular national radio program “Democracy Now” has long championed free expression. The program, entitled “Rachel’s Words” was attended by over 2000. The evening featured a number of prominent US artists reading from Rachel’s works.

The night was inspirational. Rachel’s insights remain poignant and powerful. The suffering that tormented her and the responsibility she felt to stop the brutality of the occupation continue to present a moral challenge.

In one entry, for example, Rachel wrote about “watching a father lead his two tiny children, holding his hands, out into the sight of tanks and a sniper tower and bulldozers and Jeeps because he thought his house was going to be exploded.”

“This is the area,” she continued, “where Sunday about 150 men were rounded up and contained with gunfire over their heads and around them while tanks and bulldozers destroyed 25 greenhouses—the livelihoods for 300 people.”

Rachel’s response was to stand between the father and the tanks to offer them protection. Why would she do so? Rachel explained that “Coming here is one of the better things I’ve ever done. . . . I’m in the midst of a genocide which I [as an American] am indirectly supporting and for which my government a largely responsible.”

“It is,” she concludes, “a good for us all to drop everything and devote our lives to making this stop.”

The night was also disturbing. Rachel was murdered trying to make it all stop. And yet the suffering of Palestinians continues. Hanging heavy over the entire evening was the knowledge that Gaza is starving. The Wall continues to be built. Palestinian land continues to be raped by bulldozers planning new settlements and roads. The brutality of the occupation continues to take its toll on the lives of millions.

Political pressure silenced the few Congressional voices who asked for an investigation into Rachel’s death. And now, that same pressure has sought to silence “My Name is Rachel Corrie.”

But if our night at Riverside Church made anything clear at all, it is that Rachel’s words will continue to live and inspire and disturb. That is why some remain so afraid of the power of this young woman’s words. I urge you to read them.