'They Have No Idea How Much I Love Her' 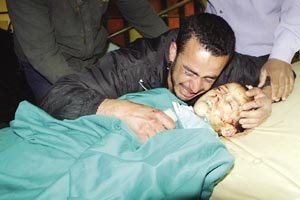 "'They (the soldiers) have no idea how much I love her,” the father said, chain-smoking and wiping away his tears. 'How can I enter the house and never see her again?'”

“'Until now, I don’t know why they did it to us, why they shot at us. It was clear that I was in the car just with a small girl,' the uncle, Kamal, said."

UPDATE: If you don't know about Tom, who runs by himself informationclearinghouse, he is a geat supporter of Palestine. I just noticed that he ran the same picture that's on this post on his main page for March 18 at his incredible site which has a big circulation.

"Eight-year-old Akbar Zayed was on her way to have stitches removed from her chin when a barrage of Israeli Army bullets killed her on the spot, her family said yesterday."

The story reports that Akbar's father, Abdel, had asked her uncle, Kamal, to take her to the clinic to get stitches removed from her chin.

Kamal Zayed said that three men ran toward his car and that he was fired upon before he could turn off the engine.

“'I saw them behind the fence. There were more than 30 soldiers. The first bullet hit my niece. She got a bullet in the head from the very beginning,' Kamal recalled from his hospital bed, where he was being treated yesterday for gunshot wounds in his arm and leg. When the gunfire erupted, Kamal had just arrived at the clinic where his niece was to have her stitches removed.

“'I started to yell ... opened the door and started taking her out of the car to get her into the clinic. They (the soldiers) yelled at me to put her on the ground, started shooting in the air. I don’t know what they shot at.' Kamal said.

"Later, Kamal said he was pulled out of the ambulance by soldiers and interrogated for more than two hours before being allowed to receive medical treatment."

Akber's death, like many deaths of Palestinian children, has gone unnoticed in the west. A search of yahoo news shows a three sentence update in sundaymail.co.uk and a story in the news.telegraph headlined "Britain Condemns Israel Over Fatal Shooting of Child." Her death merits one sentence in the ninth paragraph in this AP story headlined "Hamas Forms Government Without Moderates." And her death is mentioned in four sentences at the end of this AP story in Desertnews.com.

Nothing Appears on the BBC Middle East News Page. There is a story about the Israeli soldier shot by his comrade.

The only western media coming up in a googlenews search is the previously mentioned telegraph story.