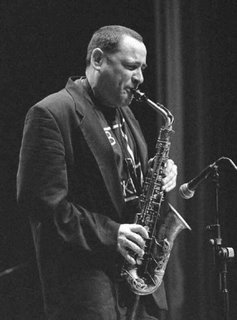 
Few in the entertainment industry dare to speak out publicly and favorably to western audiences about the Palestinian people: Vanessa Redgrave is one and most recently, Hani Abu Assad, whose film Paradise Now, won the Golden Globe Award for Best Foreign Language film, and was nominated for an Academy Award.

On March 23, Atzmon performed in Frankfurt to a packed house at Frankfurt's Music and Performance School's Little Theater. And these were the words interspersed throughout a virtuoso performance he spoke to the three hundred plus German audience:

As you can tell, we are pretty angry

Nothing to do with you; more to do with Americans and Zionists...liberating the American people

Before he plays the last song of the evening, Jenin, he said,

We dedicate this tune to the Palestinians whose land it is only and who have the Right of Return and to the Iraqis who have the right not to be liberated.

After the show, I eavesdropped as Gilad was talking to an American-British half-Jewish woman who disagreed with his statement that the land was "only" Palestinians.' He noted that every person in historic Palestine should enjoy equal rights. And he put a copy of Exile in her hands and told her that it was free to her.

And in that act, so determined he was to convince the woman of the simple justice of his plea for the Palesinians, one could clearly see an inordinately gifted man as driven by justice as he is by his music; in fact, a man so principled, that he most likely has forgone what could have been a lucrative market in the US in the interests of the Palestinian people he so fervently champions.