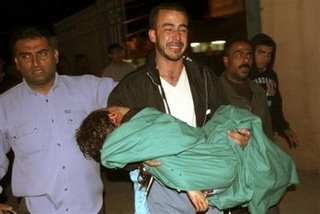 Abdul Rahmen Zaed carries his eight year old daughter, Akaber, who was murdered by Israel's Occupation Forces in her own neighborhood during an "operation" yesterday in Yanoun.

According to IMEMC, "A Palestinian medical source in Jenin reported that Akaber Abdul-Rahman Zedan, 8, was shot dead after the soldiers fired with live ammunition at dozens of homes in the village.

"The child who was killed by military fire was leaving her home adjacent to the surrounded home. She died of her wounds after the soldiers delayed an ambulance trying to evacuate her.

"Also, an Israeli military spokesperson claimed that soldiers fired at a taxi after its driver failed to stop when ordered, and that the child was one of the passengers.

"The family of the child, and eyewitnesses denied the military allegations and confirmed that the child was shot near her house."

It is indeed unfortunate that Palestinians insist upon living among other Palestinians. They tend to get murdered that way.

Meanwhile, read about a thirty-eight year old Canadian secular Jewish woman who has found her 'identity' in Israel. Did that include her introduction to the 'Israeli' culinary inventions of falafel and hummus? Touching.

I hear many of the campaign materials must be written in Russian to accomodate the Russian immigrants to the 'land without a people for a people without a land.'

I love this little exchange from the story cited above between a Russian immigrant and the Canadian immigrant:

"And what do you think of my decision to immigrate?" I asked.

"I see your decision in the same terms as my own. You were looking for your identity."

I am so glad that they've found themselves. Were they lost before?

And this exchange with a Palestinian is priceless:

"I asked Fayrouz how she saw me, a secular Jew who had moved to Israel."

"'I'm sorry if this hurts you, but I think it's stupid to define Judaism as a nationality. Judaism is a religion and I respect it. But I think that a Jew who lives in Canada is a Canadian. I don't understand the need to define your identity.'"

Next time we meet, I'll ask her how she, a Palestinian Israeli struggling to define her identity, could not understand my search for a place where I could be comfortable defining myself as a secular Jew.

But best of all is this comment on this statement from the Canadian woman in-search-of-an-identity: "my search for a place where I could be comfortable defining myself as a secular Jew."

I don't think the penny's dropped yet with Ms Goldman.
Her "comfort" with her self-image comes at a considerable cost, to others.

I am sure that the parents of Akaber would agree.