Rothstein: Cannot Forgive Pals For Forcing Us to Blow Up Their Homes 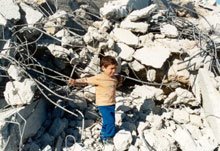 It is too bad that New Yorkers won't get to see My Name is Rachel Corrie, any time soon because it has been postponed by the New York Theatre Workshop.

Edward Rothstein, culture critic for the New York Times, doesn't have too much of a problem with this development because according to him the play doesn't provide the underlying reasons for Israel's demolition of Palestinian houses. Aside from his non-sequitor that in light of the Hamas victory, the play about a non-violent young woman who died defending the home of a middle class Paletinian pharmacist and his family might "feed" its propagandistic maw" in "Too Hot to Handle, Too Hot Not To Handle," he writes, "there is no hint about why such demolitions were taking place."

Along with justifying House demolitions, a violation of international law, he also justifies the theater company's cowardice when he maintains, "there might have been assertions that the company was glorifying the mock-heroics of a naif who tried to block efforts to cut off terrorist weapon smuggling."