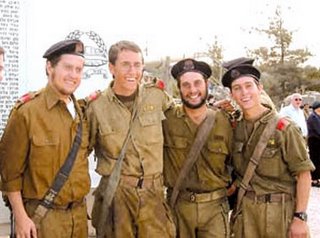 WHAT could be so enjoyable about serving in the army - any army? At the moment, over 5,000 young Jews - most between 18 and 22 years - from all over the world, have come alone to Israel to enlist. Why do they do it? What's the motivation?

There are probably 5,000 different reasons, but for most, it appears to be some combination of a desire to protect their people and homeland, a sense of tradition, a desire to fit into Israeli society later, and for most, believe it or not, for the fun and adventure.

The following is a translation from the German.

This episode concerns Corporal Yaron Pazi one of five Europeans who made Aliyah to Israel recently with the intention of becoming soldiers in Israel's Occupation Forces.

Without knowledge of the language and without their families, they made Aliyah:

Corporal Yaron Pazi came from Germany, Korporal Ari Parmesat comes from France, Korporal Victoria Yvenko came out of the Ukraine, while corporal Simona Shem-Tov immigrated from Holland and his comrad Shmuel Lalerindika left his old homeland of India—five IDF soldiers, who sought a new future in the Army, and this without knowledge of the languge and without their families but with much optimism.


Corporal Ari Parmesat: I thought, we were all brothers here.
He is twenty years and ten months old. He immigrated from Roannes, France to Israel in 2001. He lives in Jerusalem with four other French soldiers who are here alone.

Military Service: On a training path with the Haruv Batallion

Family in foreign country: Parents and a sister

During his time in Europe: As a young child I was a member of Hashomer Hatzair. My family was not religious, but we were interested in tradition and Zionism. When the Intifada broke out and I saw what happened, including the terror-attacks and the increase of antisemitism in France, I began to think about what it actually meant to be Jewish. Why did people regard me as someone different? I began to read books about Israel, including the books of Rabin and Barak and I also participated in pro-Israel demonstrations.

Expectation: "I thought, that everyone here in Israel would be brothers, Zionists and would be banded together with affection."

The First Impression: "First, immediately upon my arrival, everything was special for me, beautiful and good. I saw so many signs in Hebrew and thought, "Wow! Jews constructed this street. My eyes were popping out of my head with excitement and surprise.

Disappointment: The people have lost their Zionism. When I entered the army, I thought that all soldiers would want to become combat soldiers and that it would make sense. I saw many deadbeats, who were looking for the easy way out, who were making themselves bums. I did not think that something like that would exist here. During the pullout we blocked roads and I saw my brothers, how my Jewish brothers, mutually roared at one another. I understood the anger of the settlers, but an enlisted soldier cannot oppose orders, thus why did they scream at him?

Longing for Home: I miss my parents the most. And although I don’t like France very much, I miss the unique atmosphere of Paris’s streets, buildings, shops, and museums.

Rise of Antisemitism: When I went for a walk and I wore my magen david, I would be called Jewish son of a whore by Arabs. That happened many times in France.

And Concerning Zionism Now: In the Diaspora Jews have a heavy load to carry. If one lives in Israel, one becomes a strong Jew. It is your country. Everything that's standing here is thanks to the work of the Jewish people. One holds one head up high here, if you wear a Kippa or a Mogen David no one disturbs you.