'Another Brick in the Monstrous Wall' 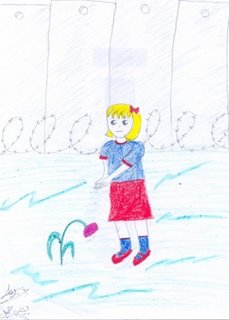 Our Dreams Are Broken by Inas Jamil Ahmad Soliman

"Omar Barghouti, of the Palestinian Campaign for the Academic and Cultural Boycott of Israel, said yesterday: 'We are appealing to Roger Waters because we feel that a principled and conscientious artist like him, who is on record opposing Israel's illegal wall, would be more accommodating to our perspective, to our moral argument.' Mr Barghouti, a choreographer, said that supporters of the call would not be satisfied if Waters agreed to perform in a Palestinian location. He said: "We do not wish to become a fig leaf for anyone who does not mind becoming complicit in Israel's crimes ... Performing in Israel as if it were normal, as if it were not building a monstrous colonial wall ... is simply unacceptable."

And a letter to the paper:

Waters has been beguiled and charmed by Zionism if he honestly thinks Israel wants peace. Sadly that is not a good thing as the Israel peace camp does great harm to real justice and a lasting peace because so much of it is designed to help re-reinforce segregation and that monstrous wall.

While being an Israeli does not bar any one from being a human being, fact is many Israelis hold dual citizenships- full and equal rights and privileges in two countries while most Palestinians have no rights or freedoms ANYWHERE. The Palestinians are not even safe in their own homes. Millions are refugees with more and more being made every day. There is no sanctuary- even prayers in church are disturbed by firecrackers- Israeli terror, with the Zionist PR teams quickly going into overdrive to spin it away from what it is: Zionist bigotry, scorn and the intentional harassment and methodical dispossession and displacement of the native non-Jewish population of the Holy Land. The ongoing process of genocide.

Our politicians and even our newspapers might be slow to catch on - but the world has woken up to the very real plight of the Palestinians and the barbed insult of Zionist Israel's concrete wall of hate. If Waters does that concert in Tel Aviv he will be best remembered as yet another brick in that monstrous wall.... bringing a whole new poignancy- and a whole bunch of hypocrisy- to his lyrics.

Waters appears to be unmoved:

"I am happy to play to anybody who believes in peace. I don't discriminate between any of my fans, wherever they live. Being an Israeli does not disbar from being a human being."

He also appears to have bought into the "formaldehyde" peace plan (thanks Angus).

"Concert promoter Shuki Weiss said Waters was persuaded to come to Israel after it pulled out of the Gaza Strip last year in a move billed as breaking a deadlock in peacemaking."

"His message is about peace and coexistence, that walls should be replaced by bridges."

Fine words. But no walls will be tumbling down any time soon unless world class artists take a principled stand as they did for apartheid South Africa.

"How can someone who wants to look like a leftist in the world -- fighting against the Berlin Wall, for open borders, and for love between people -- come to Israel while they are still building their wall and hold a musical event?" Sliman Mansour of the Palestinian Association for Contemporary Art, told Reuters.