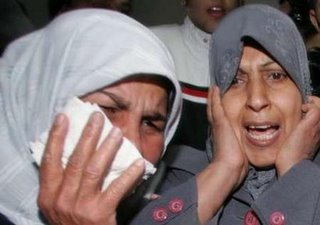 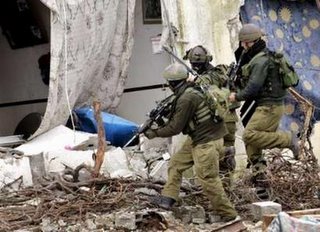 Balata Refugee camp was invaded early this morning. A resident of the
camp, Muhammad Al Qaisy, leader of Al Aqsa was arrested the house he
was found in belonging to the Hamami family was blown up from the
inside and it's garden bulldozed.

The military set up a military base in the UNRWA girl school bringing
in tents, generators and water tanks and have taken over twenty houses
locking the families in a room of their own homes.

Youth that confronted the soldiers with stones were shot at with live
ammunition. Ibrahim Issa Hader and Muhamad Ahmad Natur were killed.
Over thirty have been injured among them, Salih Abu Aifa and Mahmnud
Raje, were shot in the legs and then detained from red Crescent
ambulance before being evacuated to hospital Another youth who was shot
in the shoulder was detained by the military for half an hour before
being evacuated to the hospital by the UPMRC (united Palestinians
Medical Relief Committees). The UPMRC are have set up a
field clinic to treat the wounded on the site.