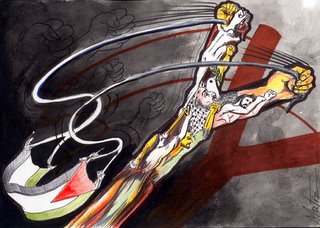 to an inspirational woman (aa) who works tirelessly on behalf of those less fortunate than she and for little Abud, a recent victim of toxic Zionism.

"Abdel Malek Zalbani is only 8 years old, a third-grade pupil, a child of refugees. His pet name: Abud.

"If a child in Pisgat Ze'ev were to throw a stone, would you also use gas against Pisgat Ze'ev?"

" Abud moves his right leg for a moment. His left side is paralyzed. The respirator tube is stuck in his mouth, his little chest rises and falls at the rate dictated by the machine, his eyes are swollen and closed. A little boy in a coma. Will the border policemen who chased him in the alleys of the refugee camp, tossing stun grenades at little children, see him? Will they think about his fate - to die or to remain a cripple for the rest of his life?"

Would they fracture a Jewish kid's skull?

"His head is bandaged, hiding the compressed fractures in his skull. The doctors will be able to assess the amount of brain damage only in a few days."

Do the border police curse the settlers?

"The residents of the camp say that they provoke the children, they honk and they curse."

Do they suffocate and damage Jewish kids' brains?

"The owner of the house, Ibrahim Amla, awoke to the smell of gas spreading in his house."

Do US settlers feel any remorse as they look down upon refugee camps, which are the result of Zionism?

"'They don't want us here. We disturb the view of Pisgat Ze'ev. They look from the balconies and see a refugee camp. That disturbs their view.

"All my life we used to go to the forest opposite. That's the only place where the children can go. Pisgat Ze'ev is there, and now they're building the wall, too. Where will we go? Where will the children go? There isn't a single playground here in the entire camp.'"

I came across a little story going through my files, "My Brother Mohammed." During the first Intifadeh, a little boy was stopped by the IOF. The little boy opened his shirt and said, "Shoot me." The IOF soldier shot and killed him. The soldier asked another little boy to tell him who ordered him to throw stones. The little boy said, "My brother, Mohammed."

"Take us to him." The little boy took the soldiers to his brother, Mohammed.