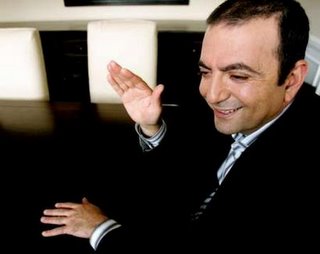 It was announced today, January 31 that Hany Abu Assad's Paradise Now is an Academy Award nominee for Best Foreign Language Film. Mabrouk to Hany. As a Palestinian-American I feel very proud of his accomplishment and I was very impressed by the cool manner he exhibited at the Frankfurt Film Festival. I know that I am not alone in my feeling, and I think that every Palestinian is overjoyed for his great success. I feel like my Aunt Siham felt when one of us got into a good college or medical school. She would just go on and on.

The nomination provides an opportunity for his film to receive wide exposure so that westerners will know that there is more to being a Palestinian than the usual demonisation as "terrorist." The following story regarding a Ramallah audience's reaction to the film appeared in the now, unfortunately, no longer published Palestine Report. Here is my account of the film's Frankfurt premiere and a write up of a press conference that Abu Assad held after the showing.