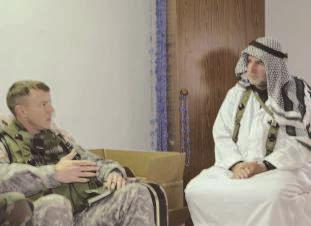 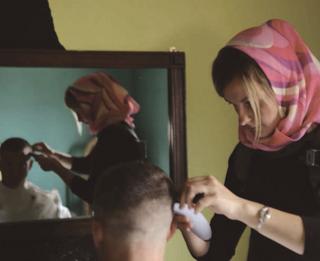 Capt. Kuzio is tasked with teaching his men "diplomacy," or how to "mingle" with Iraqis. To that end a fake Iraqi village called Rusafa replete with Bavarians acting as fake villagers was created in the beer loving, cuckoo clock making, home of Oktoberfest German province so that GIs could do a bit of role playing before setting off for Operation Iraqi "Freedom," or maybe we should rename it "Smooth talking the Sheikhs."

We are provided with a picture of Capt. Kuzio getting a haircut from a Bavarian girl in an "Iraqi" Barbershop. The hairdresser, in an attempt at Muslim atttire has a scarf rather carelessly placed on her head. We also see Kuzio bantering with a Bavarian sheikh.

Capt. Kuzio's current mission, we learn, is a "clear departure" from his last tour in Iraq in 2003 when "the focus was on 'shooting the bad guys.'" Now, the order of the day is "smooth talk."

In his efforts to create a company of "smooth talkers," Capt. Kuzio, like great teachers before him makes an analogy. He says, "I tell them it's like trying to talk up a girl at a bar." How simple! Just imagine Iraqis as chicks sitting on barstools waiting for Mr. Perfect and the American GIs hoping for a score.

As many of "the fake villagers were attractive Bavarian women," his men had no problem "engaging in casual conversation."

Let's give peace a chance here and hope that they are as successful with Iraqis. "I've never been to Eye rak before, but I feel as if I've known you forever," might serve as an icebreaker for Kuzio and his band of smooth talking diplomats.