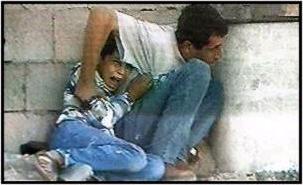 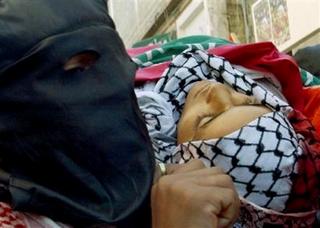 Nestled in his father's arms, a bird afraid of the hell above him,
Mohammad prays:
Father, protect me from flying.
My wing is weak against the wind,
and the light is black.

Mohammad wants to go home,
without a bicycle,
without a new shirt.
He wants his school desk and his book
of grammar. Take me home, father, so I can finish
my homework and complete my years slowly,
slowly on the seashore and under the palms.
Nothing further.
Nothing beyond.

Mohammad faces an army, without a stone, without
the shrapnel of stars. He did not see the wall
where he could write: "My freedom will
not die." He has, as yet, no freedom,
no horizon for a single Picasso dove.
He is still being born. He is still being born
into the curse of his name.
How often should a boy be born without a childhood or a country?
And where will he dream, when the dream comes to him.

Mohammad sees his death approach
and remembers a moment from TV
when a tiger stalking a nursing fawn
shied away upon smelling the milk,
as if milk tames a beast of prey.
And so I am going to be saved,
says the boy, and he weeps.
My life is there, hidden
in my mother's closet.
I will be saved . . .
I can see it.

Mohammad, hunters are gunning down angels,
and the only witness
is a camera's eye
watching a boy become one
with his shadow.
His face like the sunrise, clear.
And the dew on his trousers, clear.
His hunter could have thought:
I'll leave him until he can spell "Palestine,"
I'll pawn him tomorrow,
kill him when he rebels.

Mohammad, small Christ,
where you sleep and dream
is itself an icon
made of olive branches and brass
and a people who are rising up.

Mohammad, blood superfluous to prophets and prophecies,
so to the right side of heaven ascend,
O Mohammad.

Adi Khaled Tantawi, from Askar Refugee Camp, 13, was shot through the heart by Israeli Occupation Forces on September 30, 2005

755 Palestinian children have been killed by Israeli Occupation Forces since September, 2000.