Mohammed Omar writes about his brother, Hussam, who, at seventeen, was murdered two years ago by Israeli Occupation Forces. 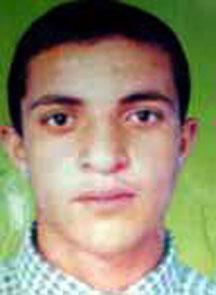 World without hearts, the majority of them have lost their feelings, lost the meaning of humanity … no values nor principles … my brother ... killed in cold blood, amidst international silence. He was in the house when the Israeli bulldozers and tanks attacked the area and invaded the houses of our neighbors. The street was completely different and the only choices were two: either to get demolished with the house and be killed under the rubble, or to get out of the house and get killed from the shelling and shooting that doesn’t differentiate between child, old women or old man. All are targeted...

My brother Hussam, 17 years old, was a secondary school student. He was one of those people who chose not to get killed by demolishing with his body in the rubble of the house, so he went out of the house trying to find shelter or a safe area where he could go to. He went out of the house and immediately got killed by 7 evil bullets (from the bullets of those countries who support Israeli army against children ... all Americans bullets as the doctors said in the hospital). In that moment when they killed him with 7 American bullets, Wedad Al Ajrami, a 33 years old women, tried to help my brother and get him to the hospital, but they killed her also. And now both of them have fallen. Read more