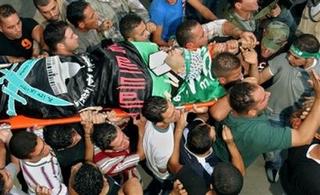 According to witnesses that spoke to WAFA a "big Israeli force swept at pre-dawn into the city amid fire shooting."

Also, soldiers fired at a medical team who arrived at the scene in order to evacuate the body of Mo'taz Abu Za’rour, 24.

According to The Palestine Monitor, between the 29th of September 2000 and the 14th of October 2003, the Israeli occupying forces carried out the following attacks on Palestinian medical services: