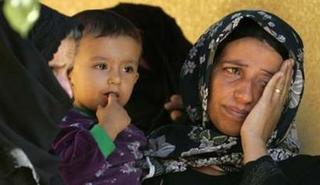 According to Palestine Center for Human Rights Gaza, "the three civilians were wounded, but IOF did not offer them any medical aid and left them to bleed to death."

PCHR further reports, "No weapons were found near their bodies."

After coordination with IOF, a Palestinian ambulance arrived two hours after the boys were shot. Reuters reports, "A Palestinian security official said an investigation showed the young men, Mohammad Odwan, Bassam Gharraba and Issa el-Amour, were unarmed and had intended to sneak into Israel to find work."

According to PCHR, "IOF claimed that they fired at 3 Palestinians near the border as they suspected them of being armed and one of them carrying explosives in a bag. However, initial field investigations refute this claim and the nature of casualties indicates that IOF intended to kill these Palestinians, even though they could have arrested or had less lethal means employed against them."

Palestinians frequently attempt to infiltrate into Israel seeking work because of the economic hardships faced in Gaza.