Human Shields: 'Killing Us . . . For Our Own Interests' 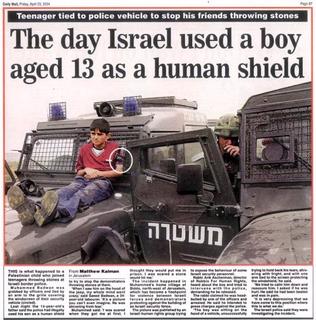 "'...the human-rights defenders in the occupied Palestinian territories operate under conditions that are absolutely incompatible with the international norms and standards of human rights. ' Jilani described Israeli actions as 'responsible for creating an environment that is totally non-conducive for Human rights defenders to conduct their work with facility and safety.'"

Nice words, but will have no effect on Israel's government. Shaul Mofaz, Israel's Defense Minister, wants Israel's high court to reconsider its ban on Israel's Occupation Forces use of Human Shields in their operations.

Just imagine, if say, former Security Chief (because Palestine doesn't have a Defense Minister) Rajoub Jibril commanded his policemen to round up a little settler thug, aim a gun at him, and force him to walk point in front of a group of Al-Khalil (Hebron) kids trying to get to school so that his hoodlum buddies wouldn't attack them.

Evidently, the use of Palestinian Human Shields is not incompatible with "Human rights." Mark Regev, Foreign Ministry Spokesperson responded to Jilani, "We pride ourselves on the fact that Israel's human-rights safeguard are of the highest international standards."

In fact, occupation forces maintain that its use of human shields actually prevents Palestinian deaths.

"The occupation army has further argued that the practice actually saves (Jewish) lives and that banning it entirely would inflict more casualties on the Palestinians themselves as the army would be forced to bombard and destroy entire buildings where 'wanted person' are barricaded."

In a statement that sadly renders the Palestinian experience at the hands of Zionists, a spokesman for the Palestinian Human Rights Center, West Bank said, "'They want to kill us and tell the world that they are doing it for our own interests.'

"The spokesman said scores of innocent Palestinians were killed as they were being used as human shields during Israeli army operations in the West Bank."

thanks to Haitham for the picture