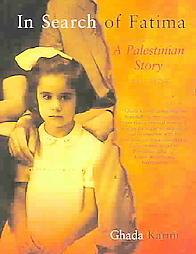 Excerpts from "Fleeing Palestine, My Right to Return"

To the sound of gunfire, Ghada Karmi was forced to flee her home in Palestine 57 years ago. Now back in Ramallah, she has chronicled every detail of her harrowing flight. By Donald Macintyre

It is one of those perfect autumn late afternoons in Jerusalem; the sunlight filtered through the heavy cypress branches, the street just as still as Ghada Karmi can remember it from her early childhood.

"You see, there's the lemon tree that was there when that was my parents' bedroom," she says, pointing across the verandah from just outside the old iron gate through which she and her family had made their hurried and final departure to the sound of automatic gunfire and mortar explosions that fateful April morning 57 years ago.

As she poses for pictures by sitting on the stone steps in the way she must have done so often as a little girl, the years suddenly roll away and for a fleeting moment you can see again the pensive, pretty eight-year-old from the only two family photographs that were not left behind for good in the Karmis' precipitate - and as they tried to tell themselves, temporary - flight from Palestine.