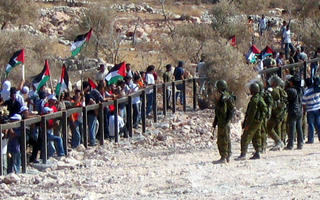 Surprise, surprise. The non-violent regular Friday demonstration in Bil'in to protest the theft of sixty percent of the village's farmland wasn't covered in the western press. Isn't that just fortuitous for the US's ethnic cleansing lovin' pal, Israel?

Around 1pm, soldiers went under the barrier and stormed the crowed pushing and hitting us nonviolent demonstrators. Israeli activists stood their ground and resisted the soldiers attempts to push them back. After much struggle and de-arresting, the soldiers managed to detain seventeen Israeli activists and carried them into a large armored vehicle. They also detained Mohammad Al Khatib, an organizer with Bil’in’s Popular Committee against the Wall and Settlements, after roughing him up and tearing his clothes. They later released him without charges. They released sixteen of the Israelis without charges, but are still holding Eli and charging him with interfering with an investigation.

As the day went on and the demonstration dwindled, a group of young boys began throwing and hurling rocks with slingshots (David style). The soldiers, from a good 150 meters away, fired teargas canister after teargas canister at the boys who would briefly disperse to let the gas clear and then resume their symbolic resistance. Again, impressive persistence. Palestinian medics treated several of the boys for excessive teargas inhalation.