Colonists: What Manner of Man?

Graffiti in Hebron: Arabs to the Crematoria 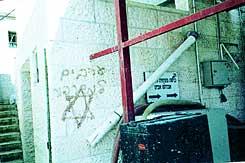 Four Palestinian residents, including an infant, were injured in the West Bank city of Hebron, during separate attacks carried out by settlers and soldiers in the city.

An 80-year-old man died on Sunday evening after being attacked by wild pigs released by settlers of Shaveh Shamron settlement, near the West Bank city of Nablus.

In a separate incident, an extremist settlers group burnt 70 Dunams of Olive orchards which belong to residents of Salem village, near Nablus.

A Palestinian organization which monitors settlement activities reported on Monday that the Israeli Authorities annexed 1000 Dunams of Palestinian orchards to Rotem settlement in Wadi All Maleh area, east of the West Bank city of Tubas

Also, settlers of Maskot settlement, 1 km to the south of Rotem, started to install new constructions in an attempt to expand the settlement by annexing huge areas of Palestinian lands. In a nearby area, heavy machines and bulldozers were seen on Sunday preparing the basis for the new homes in Baskot settlement, close to the main road which links the northern plains with Tubas and Tammoun. The annexed areas, as well as the rest of the farmlands there, are fertile and include natural resources, such as springs.

Reported 13/10 Israeli forces closed the Ibrahimi Mosque in Hebron for the duration of the Jewish holiday of Yom Kippur. (Colonists:400 Arabs: 75,000)

In late March, shepherds from Tuwani and Mufakara, Palestinian villages near Hebron in the southern West Bank, discovered strange, blue pellets littering their grazing fields. Suspecting these seeds as a possible cause of the mysterious deaths of dozens of goats and sheep during the previous week, villagers had them analyzed. The tests confirmed their hunch: The pellets were barley laced with fluoroacetamide, a rodenticide produced only in Israel and illegal in many other countries due to its acute toxicity

A soldier in uniform told Yavin that the Hebron settlers were inciting him to shoot and kill Palestinian children. Activist Noam Federman and his wife tell him on camera that an ultimatum has to be presented to the Arab residents of Hebron: Either they leave the country immediately, or the Israel Air Force will bomb their homes

Reported 05/06/2005 In an incident three weeks ago, several haystacks made by Palestinian farmers were set alight. A few hours earlier, four young settlers sawed off the branches of numerous olive trees. And that week, Jewish shepherds brought a herd of goats and sheep to Palestinian fields that had been sown with lentils, opposite the village of Gawish in the Hebron hills.

In Beit Imra, some 200 olive trees, each about 15 years old, were chopped down. Settlers drove a plow over a cultivated field nearby and destroyed it.

And two weeks ago, 20 settlers armed with sticks and stones arrived and beat up some shepherds. A 10-year-old boy suffered injuries that required stitches to his face, and three ewes were killed.

At the end of that week, settlers stole 10 young lambs that had not yet been weaned. In the nights that followed, the Palestinians said they heard the lambs bleating, but could not reach them

Sept/01/05 THURSDAY Yesterday, twelve soldiers occupied a Palestinian home in Tel Rumeida. The soldiers have set themselves up on the family’s unfinished third floor and set up a tent inside. They have given the family no reason for occupying their home.The soldiers broke two doors upon entry, have peed in the stairwell, and have changed their clothes in front of the mother of the family, a woman in her late fifties.

Sept. 3 At about 4:30pm, I walked to the top of the Tel Rumeida hill to join others who were watching the area. The settlers have attacked Palestinian children there so often that very few of them continue to play outside. It was all very quiet and I was talking to three young girls outside their home, when a fourth girl ran over saying that the settlers had come. I quickly returned to the area where we watch the settlers and saw a group of about 30 settler youth standing 60 meters away. They were screaming insults at the Palestinians passing by. One elderly man took particular offense to something they said and asked the soldier to make them stop screaming the insults. The soldier said that he understood how the Palestinians felt, but did nothing to stop the settlers.

Sept 20 As we left the checkpoint, a settler who drives around Tel Rumeida in what looks like a golf cart was taking figs from a tree located in front of a Palestinian home located halfway up the Tel Rumeida hill and putting them in a bucket. The Israeli Palestinian who was with Yesh Din began speaking to the settler in Hebrew and asking him why he was stealing the figs. The settler laughed and said that he was not stealing them since he was taking figs from branches that hung out side the wall of the house. Soldiers came up and stood nearby and TIPH also was present. A woman who lives in the home also came out and yelled at the settler for taking the figs but he just continued to smile and laugh. Eventually he left after taking more figs.

Sept 17 Three small children, ages five to nine, came to the internationals’ home with a large piece of a broken mirror that had just been thrown at them by settlers. The mirror was about two feet by one foot in size. None of the children were hurt.