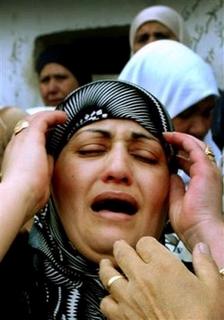 Alaa Terawi's mother at his funeral. AP's caption identifying her as the mother of an Al-Aqsa "militant," defies all reason. The Israeli Occupation Forces surrounded and invaded HIS home, Balata Refugee Camp. He defended his home, as we would expect of any young man. Photo by Nasser Istayeh

Below are excerpts from the latest of many editions of the Reuters story headlined "Israel kills 2 gunmen, teen in West Bank Offensive" about the deaths of three people, including one teenager in the occupied West Bank on Friday. It carries the byline by the Palestinian journalist Atef Sa'ad. In earlier editions the headline is "Israel kills 3 gunmen, pushes ahead with offensive." And some editions indicate that the story includes "additional reporting by Mohammed Assadi in Ramallah and Nidalal-Mughrabi in Gaza [with] writing by Jeffrey Heller in Jerusalem.

NABLUS, West Bank, Sept 30 (Reuters) - Israeli forces killed two Palestinian gunmen and a teenager in the occupied West Bank on Friday, pressing ahead with raids against militants despite a halt to cross-border rocket salvoes from the Gaza Strip.

On Thursday, Israeli troops shot dead three gunmen in West Bank raids. Hundreds of suspected militants have been detained by Israeli forces in sweeps in the territory over the past week.

Atef Sa'ad is an excellent journalist. To see just how fine a journalist he is, read "Hunger in Nablus' Old City," a story which appeared in Palestine Report in 2002, when Nablus was reoccupied by Israel.

“Suddenly the wall exploded,” said the woman. “They burst in like beasts. First there were three and then six and then there were twelve of them. Even though they put a hole in the wall, they still insisted on searching the rest of the house. You can see the mess they left behind.”

She fell silent and returned to her crying child before saying, “We have nothing left to ward off our hunger. Nothing more than this can of milk.”

“What the Israeli tanks and bulldozers have done in the old city is a destruction of the civil society and shows the evil desire of our occupiers to eliminate everything that is cultured and beautiful,” says Shaka’a. “It is a systematic destruction of the infrastructure, of everyday life. People have been without work for too long without an income. The army is making it very difficult and sometimes very dangerous for urgent services to be provided to the people.”

But it is not from Atef Sa'ad that we even learn the names of the fallen resistance fighters and the teenage boy, who was just thirteen (although the age is mentioned in some Reuters editions). From Saed Banoura of International Middle East Media Center we learn the name of the child, Adi Khaled Tantawi, 13, who was shot through the heart in Askar refugee camp, and the names of the men, who were also resistance fighters, who were killed in Balata Refugee Camp, which the Israeli Occupation Forces surrounded and then invaded. "The two fighters killed in the attack were identified as, Al Teerawi, one of the prominent leaders of the brigades in Nablus, and Jamal Jeremy." Jamal Jeremy and Al Teerawi's home was invaded by hostile; we would expect our young men to defend them.

Even in the latest version of Sa'ad's story the Palestinians' names are not mentioned. They remain gunmen, although Adi is referred to as a "teen," The Israeli Occupation Forces who surrounded and invaded Balata camp are not referred to as "gunmen"; they are "Israeli forces."

Over three hundred Palestinians who were arrested include doctors, teachers, and other professionals, but the word "militant" is used to dehumanise them in Sa'ad's story. I do not think that Sa'ad did this intentionally; we learn that he did not even write the story which has his byline.

To its credit, Reuters ran a video on its site [no longer accessible] which showed friends and relatives of Al Teerawi and Jermi's paying their last respects. By showing this footage, Reuters humanises Palestinians to counter the effects of the story, which through use of diction which dehumanises, does nothing to further understanding of the conflict.