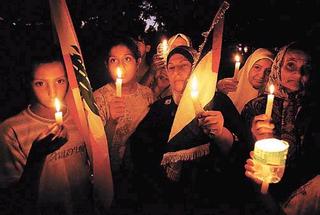 The twenty-third anniversary of the massacre in the refugee camps of Sabra and Shatila has gone virtually unnoticed by a western press too busy feting war criminal Ariel Sharon for his "courage" in returning a fraction of stolen Palestinian lands, and too busy admonishing Palestinians that peace between Israel and Palestine is basically all up to them, not bothering to mention the ongoing Israeli land thefts in the West Bank and its relentless Judaisation of Jerusalem. The western press has also taken to demonising Hamas "gunmen" at every opportunity, leaving readers clueless that Hamas is a reaction to the violence of fifty-seven years of virulent Israeli racism and ethnic cleansing.

And it looks as if Ariel Sharon will forever escape justice, of the temporal kind, anyway. Having successfully escaped justice from the Belgium Court for Sabra and Shatila, Tony Blair has promised him, according to an Israeli Army report, to take care of the matter of Israeli war criminals facing arrest and trial in the UK.

On September 16, 1982, the Lebanese Christian militia Falange, went into the Palestinian refugee camps of Sabra and Shatila near Beirut. They murdered between 800 (official Israeli figures) and 3,500, "according to the investigations of the Israeli journalist Kapeliouk," people. The Israeli army entered this part of the city the previous day. The Israeli Army, under the direction of then Defense Minister Ariel Sharon, sealed the camps, prohibiting anyone from leaving, and proceeded to observe the massacre from rooftops.

According to Musa Al-Hindi, an activist with Al-Awda (Right to Return Coalition), who was seventeen and living in Beirut at the time, "Prior to its withdrawal, Israel, who had always bragged about the IDF's 'purity of arms,' precipitated the massacre of 3000 Palestinians, Lebanese, Syrians and Egyptians in the camps of Sabrah and Shateelah. Israel has always denied responsibility for the gruesome killings of the men, women, and children of the two camps. Its soldiers might have not participated in the actual killings, but any body who is familiar with the camps and their surroundings, would have no doubt that they could see and hear the screams of the men, women and children who were being executed. After all, the blood orgy carried out by the scavengers of the right-wing Phalangists lasted for two days, and the Israelis had established posts on top of the buildings surrounding the camps."

The Israelis also supplied the bulldozers. According to Malaysia's New Straits Times
"Instead of protecting the inmates of the refugee camps, Sharon had meetings with Israeli ally Major Saad Haddad, leader of the South Lebanon Army militia, and Phalangist militiamen and politicians Elie Hobeika, Fadie Frem, Zahi Bustami, Amin and Pierre Gemayel. Israeli soldiers surrounded and sealed the camps but allowed the Haddads and the Phalangists to enter the refugee camps and go on a murder spree. Israel supplied bulldozers to demolish buildings and bury the victims in mass graves. Any refugees fleeing the massacre were turned back. From observation posts on the periphery of the camps, Israeli generals planned and observed the massacre of the inmates. At night the Israeli Defence Force fired flares to light up the sky for the murderous attacks to continue. The Lebanese militia were given food, water and ammunition throughout the massacre."

To its credit, the BBC's website reprised the BBC story from 1982. It also printed a gripping memoir from Deborah Thornton Jackson, a British citizen married to a Lebanese businessman. Jackson volunteered in the Gaza Hospital in Beirut in the wake of the massacre. Her account, like all of the accounts of the survivors and witnesses to the massacre, is harrowing and difficult to read.

"What will always stick in my memory is of a little boy that had come from the camps, and his little body had no limbs. I can remember just holding him, holding his little body close. He was covered with blood and the life was running out of him. He was crying for his mother. "

Al-Hindi recalls going in the southern entrance of the camp and wishing that he had not.

"What I saw will continue to haunt me for the rest of my life. I saw a middle-aged woman hysterically dancing over a pile of children's bodies, pulling her own hair and scratching her face, and singing unintelligibly. I tried to make some sense of her words. The only phrase I could hear was 'ya mshaharah ya Subhiyeh [what a hellish, unbelievable sight, oh Subhiyeh].' The rest were just unintelligible sounds. A sobbing man, either her husband or brother, I assumed, was trying to make her stop, but without any success. I can still remember her dark, wrinkled and bleeding face, her gray hair and the Hennah on her chin. Next to the pile kneeled a younger woman, with her face buried in the sand. Suddenly she stood up and started to tear the top of her dress, only to be stopped by other women in the crowd."

As long as the media continues in its one-sided coverage of Middle East it is culpable in the ongoing horrors perpetuated by the US and Israel in the region. BBC was the only mainstream western news outlet to show up on a google and yahoo news search for Sabra/Shatila. Few in the western world know that suicide bombings are a reaction to the horrors of a racism that welcomes anyone with a Jewish grandparent to Israel, but will prohibit any Palestinian in exile from going home. Issa Hamoud, a refugee in Lebanon told CNN five years ago, "Any Palestinian who tells you that he doesn't want to return to the homeland is lying. Any one who resides outside their home lives in humiliation. Just look at what happened to our people right here."

Anne Annab, housewife, the Cindy Sheehan of Palestinian activists in the US, writes letters on behalf of justice for the Palestinians to the western media every day. Annie wrote the following to the Baltimore Sun regarding its Zionist propaganda story, "Hamas Gunmen March Through Gaza Settlements."

"Thanks to the racist nature of political Zionism, Palestinians are veritable prisoners, persecuted and impoverished no matter what they do or say, and demonized as if they hold all the power and a huge arsenal. Israel stands in long term and flagrant violations of international law and the Palestinians' basic human rights- and yet Sharon is welcomed at the UN and given a podium to promote his bible stories so that American Zionists will continue to eagerly arm and empower Israeli racism.