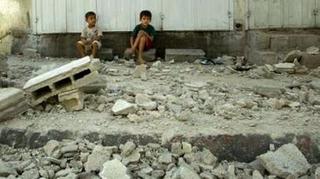 Deir Al Belah resident Ismail Abu Aziz says his five year old son Mohammad wets his bed every night, unable to control his bladder because he is so afraid. He, like many children in the Gaza Strip, is waking up from nightmares panicked from the sound explosions. Read story.

Sources in one of the sports clubs said it is not the first time that occupation forces have broken into their centers. It was reported that panic spread through the city as Israeli soldiers ran through the Rayada neighborhood, opening fire. Read story.

Israeli PM Sharon's directive to attack the Hamas party after saying he would stop the Palestinian Legislative Council elections if the party participated, has stretched well beyond Hamas. Israeli Apache helicopters fired missiles into the offices of the Fateh political party and the leftist PFLP party in Gaza City this morning. Read story.

In school, Zaqut says some children can't concentrate, listening nervously, anxious whether another boom is in the offing. Read story.

Pictures from Rafah before disengagement.