More Dying in the Dark for Palestinians 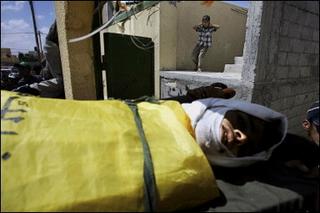 Basheer Soufi, 20 was killed Thursday by Israeli Occupation Forces. "Dr. Moawiya Hassanen, head of the Emergency Unit at the Ministry of Health, said that Soufi was shot in his head, causing instant death."

His death went unnoticed in the western press, no surprise there.

"Earlier on Wednesday, Israeli soldiers shot and injured two Palestinian children in Rafah, while they were playing near Salah Ed-Deen Street, in Rafah, One of the injured children was identified as Ahmad Qishta, 12 years old."

"A Palestinian young man was shot dead Tuesday evening by Israeli soldiers west of the southern Gaza Strip town of Khan Younis, Palestinian medics and witnesses said.
Nemmer al-Sadooni, 22, was killed and three others wounded, one in serious condition, said medics at Nasser Hospital in the town," was reported in the People's Daily Online.

Yahoo News featured a story headlined "Israel Destroys Military Facilities" on its main page Friday, September 9. Neither of the deaths got a mention even in the last paragraphs. Since the AP's Amy Teibel was the author it's no wonder. Teibel is one of the minions of journalists who have, to borrow Al-Jazeera's Laila El-Haddad's phrase, succumbed to the "weepy" settler syndrome. Not to draw undue attention to Teibel, hundreds of stories appearing today about Israel's military departure from Gaza do not mention the two pointless deaths.

What is a wonder is that journalists, in spite of some of their laudable performances covering the victims of Hurricane Katrina, don't point out that the Israeli Occupation Forces managed to contain themselves when acid was thrown on them by Jews, but think nothing of targeting Palestinian youth through the head and heart.

Meanwhile the Butcher of Beirut will be feted at the UN on September 15. Business as usual for the war criminals of the world.