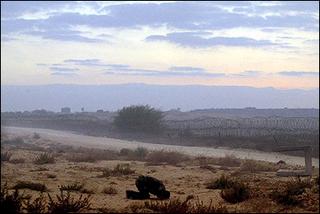 Predictably, the mainstream press featured screaming headlines of "blazing" synagogues set by rabid Pals: "Synagogues burned as Israel Exits Gaza," appeared as a head on Yahoo's Main News Page, while this lead appeared from Reuters: "Jubilant Palestinians planted flags on the rubble of Jewish settlements and set synagogues ablaze on Monday as Israeli troops pulled out of the Gaza Strip after 38 years of occupation." What a stroke of brilliance to leave the empty synagogues behind. It should be all too obvious to anyone with at least half of his/her functioning brain cells that the Zionists calculated a few "blazing synagogues" would result in groovy press for the retreating Israelis and the usual dehumanisation of the Pals. The western press never disappoints.

Unfortunately, one Palestinian was killed. And Palestine Center for Human Rights, Gaza, reports that six drowned at a Khan Yunis Beach.

Laila El-Haddad writes in Raising Yousuf that EU and PA officials reported "everything has been destroyed [by colonists], uprooted, ripped out, or looted."

She writes further, "Sabri Saidam, Minister of Telecommunications, compared it to the Katrina disaster zone."

There is more. "An European official I spoke with said even the greenhouses-for which the settlers were PAID something like $40 million to keep, were dismantled-only the tarp and wire was kept in tact, everything IN the greenhouses was destroyed or taken back.

" He told me some settlers came back in and offered to 're-sell' the machinery that kept the greenhouses going.Everything was taken out, even light sockets. Trees were uprooted, electricity lines were cut, and vegetation was not watered for 15 days leaving a 'scorched earth.' The official also told me how he saw so-called sewage treatment facilities: 'basically it was one big septic tank-the sewage was dumped onto gaza dunes, and filtered into the Coastal aquifer.'"

Imagine that. I guess that The Los Angeles Times must have been too busy checking out the blazing synagogues that no longer had their religious artifacts in them to bother to include some concrete details about the colonists' shenanigans. Their headline: "Gazans Burn Synagogues in Israelis' Soldiers Wake."

The AP's Ravi Nessman and Miriam Fam exert a bit of patience and wait until the second paragraph to wax about the blazing synagogues. In the ninth and tenth paragraphs they get around to the dead Palestinians. No matter, though; this is the way of the world as Hurricane Katrina so baldly shows; people are expendable, property is paramount.

As Israeli "disengages" the corporate press engages in its business as usual, offering little insight, serving up the usual dehumanised Palestinians, and ignoring the fact that Gaza remains a prison that no one may enter or leave without extreme difficulty. (photo by Awad Awad, AFP)