The Irgun and Transjordan 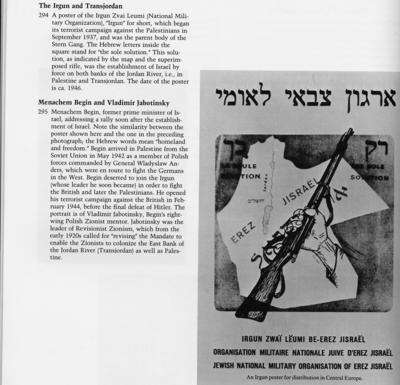 A poster of the Irgun Leumi (National Military Oranization), "Irgun" for short, which began its terrorist campaign against the Palestinians in September 1937, and was the parent body of the Stern Gang. The Hebrew letters inside the square stand for "the sole solution." This solution, as indicated by the map and superimposed rifle, was the establishment of Israel by force on both banks of the Jordan River, i.e., in Palestine and Transjordan. The date of the poster is ca 1946.

Khalidi, Walid. Before Their Diaspora: A Photographic History of the Palestinians, 1876-1948. Institute for Palestine Studies: Washington DC, 1991.