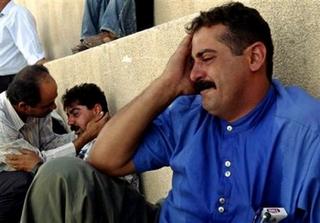 “They moved him to Jenin in the midst of an atmosphere of anger and rage that was expressed by organizational representatives and his family who were pushing their way to the hospital amidst great anger. The crime came when the Palestinians were celebrating the withdrawal of the Israelis. There’s a large demonstration in Silat Athahar, screaming against the occupation and to continue the resistance against the continual Israeli crimes.” Photo, Mohammed Ballas, AP