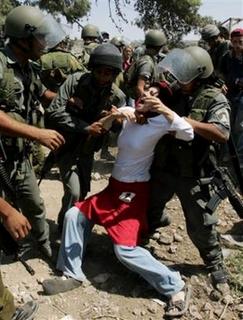 At 5:00 AM Thursday Israeli Occupation Forces, the desert bloomers, entered Bil'in, the town where peaceful protests against the apartheid wall occur each Friday (except for the time the IOF planted stone throwers in with the protesters, which gave them an excuse, as if they ever need one, to shoot), and announced a curfew.

This is what the only democracy in the Middle East did to the courageous curfew breakers according to International Solidarity Movement:

"Mohammed Al Khateb, a coordinator with the Bil'in Popular Committee Against the Wall, was beaten by soldiers and has suffered some injuries. Two other Palestinians also have been injured. One man has a rubber bullet lodged in his leg and another suffered injury by shrapnel from a sound grenade."

The number of activists wounded and arrested in Bil'in village has rapidly mounted due to the Israeli soldiers' violence against them.Member of the Popular Committee against the Apartheid Wall in the village said the number of the activists arrested by IOF has mounted to 52, most of them Israelis and internationals. He added at least 40 were wounded, including two journalists and three children.He added that the head of the Popular Committee against the Apartheid Wall in Bil'in Abdullah Abu Rahma was arrested.Witnesses said IOF assaulted the team of the Egyptian TV with a tear gas canister, wounding the TV Reporter Muna Hawwash and the cameraman Islam Hamad.

George Bush, Israel's benefactor, and Israel aka "light unto the nations," and "only democracy in the Middle East," continue to make remarkable progress bringing democracy to the Middle East.