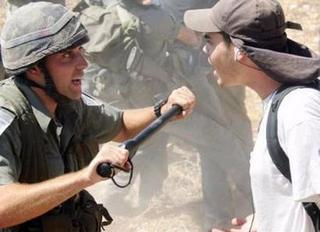 Google and Yahoo news search show that Bil'in's regular non-violent Friday protest was covered by Ha'aretz, International Middle East Media Center, and Palestine News Agency. And that's it except for a couple pictures posted on the Yahoo Middle East Slide Show by Reuters. A much bigger story is the "looting" of the much heralded greenhouses but according to Haaretz the illegal colonies were ransacked and looted bigtime before the Palestinians had access to them. And Laila El-Haddad reported on August 30 in Raising Yousuf, "Abdullah Maani told me, 'Nearly all the settlers are back - even the settlement leader. They seem to be dismantling their greenhouses.'"

And then there is the really important story of a bigamous Gaza man who rekindled his romance with his "other" wife in Egypt.

But please know, any US citizens who bequeath six billion of your tax dollars to the "light unto the nations" that on September 16 in Bil'in, "Pianist Jacob Allegro Wegloop, a holocaust survivor, and David Rovics, an American folksinger, sang for the Palestinian children, the refugees, the Palestinian cause and children . . . .

"Abdullah Abu Rahma, head of the Public Committee Against the Wall, reported that two internationals and the coordinator of the committee, Mohammad Al Khatty, were arrested."

ISM reported to the Palestine News Agency "IOF entered into several homes in retribution for the strong non-violent resistance within the village. Four jeeps swept into the village just before the morning." As usual, the IOF employed their always at the ready rubber bullets and threw gas cannisters, wounding eight people, including three kids who suffered from gas inhalation.