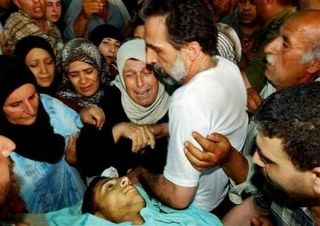 AP Cutline with my comments in brackets: Palestinian Saedah Al Hajj Ahmed, center, the mother of Mohammed Al Hajj Ahmed, 19, bottom center, is comforted as she weeps over his body during his funeral in the village of Arabeh, near the West Bank town of Jenin, Sunday, May 29, 2005. Israeli soldiers killed the Palestinian gunman [resistance fighter against thirty-seven years of the violence of land theft prohibited by the Fourth Geneva Convention] and wounded two others when Palestinians[resisting the theft of the lands to which they're indigenous; something that the PA won't do] opened fire on an Israeli base [imagine that the US set up colonies in Japan and Germany after WWII on land confiscated from Germans and Japanese and that these soldiers were defending these illegal colonies thirty-seven years after they'd confiscated them from the indigenous inhabitants] guarding a settlement [colony in violation of international law] near the West Bank town of Jenin. Soldiers returned fire and hit all three gunmen ['gunmen' is dehumanizing; look at the boy's face; he was a courageous young man resisting the violence of colonisation and defending the property to which he and his fellow Palestinians are indigenous], killing Al Hajj Ahmed [A real hero, who died too young defending his homeland; may his memory be eternal and may his soul rest in peace, and may his death not be in vain] (AP Photo/Mohammed Ballas)