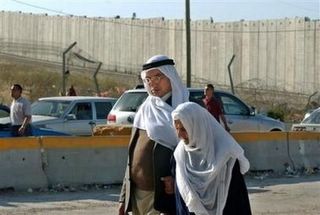 The apartheid wall at Kalandia checkpoint. "Suicide bombers" and "militants" are invariably mentioned in pictures or stories about the apartheid wall as if there were two sides to apartheid and as if the cause of Israel's discrimination were suicide bombing (Starting in September 2000, ninety-five Palestinian kids were shot through the head, through the heart and all parts of the body before any Israel kids were killed). The cause of the suicide bombing is the violence of occupation. Suicide bombings did not occur until Dr. Baruch Goldstein, a land thieving murderous colonist in Hebron, took it upon himself in 1994 to kill thirty people praying in a mosque.