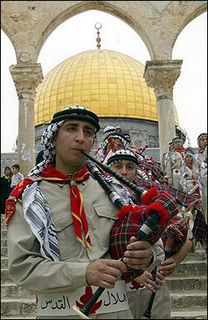 Palestinian scout in Jerusalem. No, I'm not going to do a story on the history of the Boy Scouts in Palestine. Needless to say, it is a very long one because my uncles and probably my dad were scouts; they are always marching on holidays. I watched a parade in Bethlehem on Orthodox Christmas in 1977. Anyway, the ignorant minions at Little Green Footballs, who consist of Americans and Israelis, were just falling all over themselves today after finding this picture on Yahoo news. They were incredulous that there were scouts in Palestine and were almost to a person convinced that the scouting movement just arrived in Palestine. This, as is every post, and they are considerable, that they have on Palestine, is accompanied by hundreds of racist comments. Their favorite derogatory term for a Palestinian is "Pali." I guess that's better than not acknowledging that they exist as a people at all. How could a supposedly reputable outfit like washingtonpost.com permit a site like this to be nominated and then win for a blog award? There is a lot of hate out there.