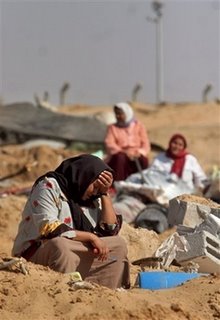 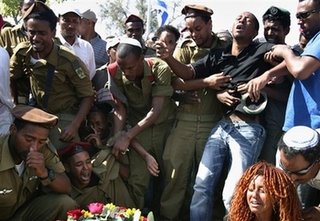 These Ethiopean transplants to historic Palestine mourn the loss of an Ethiopean soldier killed while defending his right to live on stolen Palestinian land.

The Palestinian refugee woman sits amidst the ruins of her demolished home in Rafah Refugee Camp.

Jews from all over the world have no qualms about coming to historic Palestine, bombing refugee camps, bombing refugees fleeing in their cars, shooting kids through the heart and the head, and vilifying the indigenous people among other abominations so that they may then turn around and profess themselves the light unto the nations in a land without a people for a people without a land. But never mind, when Palestinians start loving their children more than hating Jews, then there will be peace among the Ethiopean, Canadian, American, French, Indian, Chinese, Russian usurpers and the natives (who actually are all from Egypt and Lebanon because there is no such thing as a Palestinian; they just immigrated on down to Palestine in the early part of the twentieth century for the high wages the Jewish immigrants offered).

Ein Al-Hilweh Refugee Camp in Lebanon was bombed today by the world's most moral military. More about Ein Al-Hilweh in an upcoming post.