Amayreh: Reflections on the Israeli Holocaust in Lebanon 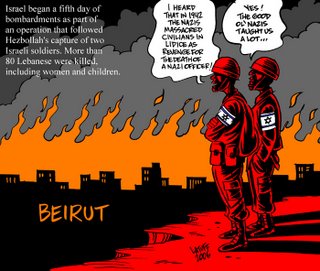 I admire and respect Khalid Amayreh immensely. His criticism of America is harsh; however, I believe that America has been hijacked by Zionists and that it is imperative that as Arab-Americans and others who are not totally brainwashed due to the manifold Zionist machinations in our country, we educate America's citizens about the ways in which Zionism undermines what we in America hold dear; i.e., Israel is institutionalized bigotry; for just one horrifying example read about handicapped Palestinian American Maysoon Ziad's ordeal at Lyddh airport. The so-called "clash of civilizations" is a bogus idea manufactured by Zionists to trick ignorant Americans and other westerners into thinking Hezbollah and Hamas, two resistance organizations, are aligned with Al-Qaeda against the West and Israel, and that Israel is fighting the "war on terror" in the Middle East. Don't believe it. Palestinians are resisting for their right to live as equals on their own personal property.

I love the country that my father adopted in 1951 and I love my Palestinian and Syrian heritage. And I am confident that Americans will one day wake up from their lethargy and fully realize the horrors that Zionism has unleashed among us. Umkahlil

The month-long Nazi-like Israeli blitz in Lebanon, which has destroyed the bulk of the country’s civilian infrastructure and killed and maimed thousands of Lebanese civilians is probably redefining and morphing our world in many respects.

The United States, which, oddly enough, much of the world still looks to for political (though not moral) leadership, not only enthusiastically endorsed this Gestapo- like savagery but hastened to supply the rapist-aggressor with “smart bombs” and “bunker busters” to make sure that the extermination of children in Southern Lebanon is done more efficiently and more effectively.

Interestingly, this comes from an administration that only a few months ago claimed to be Lebanon’s real friend upon whom the Lebanese government and people could count for help and support in difficult times.

Needless to say, this criminal perfidy and hypocrisy just gives credence to a French philosopher’s view of the United States, that it is merely “technology without humanity and civilization without culture.”

As for the more cultured and civilized Europe, it has been behaving very much like a whore who urges her town’s folks to erect a great memorial plaque to celebrate and glorify her chastity. What else can be said of a continent that said nothing and did nothing while Lebanon was being slaughtered very much like Europe was being slaughtered by the Third Reich six decades ago? Or maybe some European countries, like Germany, feel they can’t satisfactorily atone for one holocaust except by allowing Nazi Israel to commit another holocaust against the peoples of the Middle East?

I am not going to vilify or even criticize official Arab regimes for their reactions to the latest crimes of Zio-Nazism. Arab leaders, nearly without exception, are actually more than just cheap and submissive servants working for evil America against the interests of their peoples. They are in fact mere slaves of the Evangelical Fuehrer at the White House.

And by definitions, slaves, especially undignified slaves like the Arab kings, Princes and Presidents-for-life , have no free will of their own and all they can do is reflect and express the will of their masters.

It is indeed lamentable that the descendants of the likes of Omar Ibn al-Khattab, Ali Ibn Abi Taleb, Harun al Rashid and Salahuddin have so willfully, and without the slightest resistance, become slaves of choice for the Peter the Hermit of our time.

I really don’t know what Abu al Tayyeb al Mutanabi would have said of these scum, vermin and dirty animals who say nothing and do nothing while Lebanese and Palestinian babies are slaughtered like meek sheep in Gaza and Qana and Mirwaheen and dozens of other places.

Maybe he would have coined new words to denote the Arab regimes’ perfidy, treachery, and total subservience to the Nazis of our time.

Maybe he would have damned and cursed the masses that didn’t seek to trash these evil and disgraced despots who are so potent in repressing and humiliating their own people but totally impotent and obsequious when dealing with the enemy.

Well, why should anybody be surprised. Zuheir Ibn Abi Sulma said it more than 1450 years ago: He that doesn’t respect himself, shall not be respected.

Non the less, the silence and inaction of official Arab regimes, which is not without a conspiratorial content, doesn’t relieve the masses of the responsibility to take their destiny into their own hands.

We can’t entrust our future and survival to the Abi Righals or Abdulah al-Shaghirs of our time. Nor can we count on an international community or a United Nations that have been thoroughly emasculated by a new world order dominated by coercion, lies, spin, evangelical insanity and Talmudic madness.

Should we, as Arabs and Muslims, wait until six million or probably twice that many of our children and women and civilians are exterminated by Israel’s atomic bombs?

Should we wait until Israel turns our towns and population centers to updated versions of Auschwitz, Bergen Belsen and Treblinka?

Should we wait until Israel bombs Mecca and Madina and demolishes al-Majidul Aqsa of Jerusalem?

We, Arabs and Muslims in the Middle East, must stop entertaining the idea that America might one day pressure Israel to give up our occupied land, let alone stop massacring our children.

Indeed, seeking or eve dreaming of justice from an administration that calls certified war criminals “men of peace,” is like seeking justice in a thieves’ den.

It is time we realize that America, especially this evangelical Nazi administration, is part of the problem and can never be part of the solution.

The only language that America respects these days is the language adopted by North Korea and Iran. They understood well the American psych and mentality. Can’t we?

And Hizbullah, yes, Hizbullah, these valiant and dignified freedom fighters who have challenged the Wehrmacht of our time in ways unseen in all Arab-Israeli wars.

We salute these brave fighters for their bravery, faithfulness and heroism.

In fact, each and every Arab and Muslim country needs have its own version of Hizbullah if only to repulse and deter the Zio-Nazi crusade against our peoples.

After all, the bloated Arab armies are there solely to protect and sustain despotism and tyranny and repress and humiliate the masses, all in the name of maintaining stability, in other words, safeguarding America’s neocolonial interests in this part of the world.

In short, if we don’t learn how to defend ourselves, protect our children and deter our cruel enemy, our blood will remain the world’s cheapest.