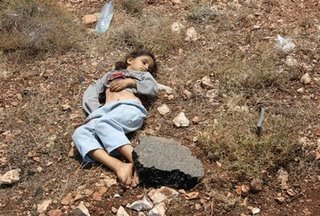 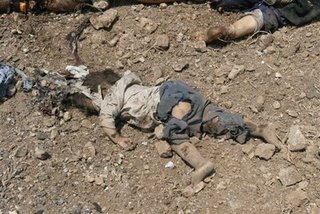 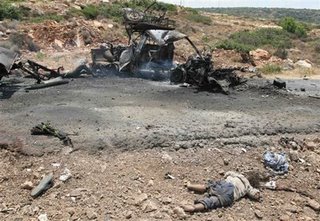 These pictures and the following post are from As'ad AbuKhalil's blog. His information about Lebanon is the most articulate, humane, and genuine. It is my hope that Arab bloggers will link to him and his post.

I have just received these pictures from Hanady Salman, an editor at As-Safir, with this message:
"Dear friends and colleagues ,
You will all have to excuse me for sending this. It's pictures of the bodies of babies killed by the israelis in South lebanon. They are all burnt. I need your help. I am almost certain these pictures won't be published in the West, although they are associated press pictures. I need your help exposing them if you can. The problem is these are people who were asked to leave
their village , Ter Hafra , this morning , within two hours , or else. ... So those who were able to flee went to the closer UN base where they were asked to leave. I think that after the Qana massacres in 1996 when civilians were bombed after they took chelter in UN headquarters , the UN does not want to be responssible for the lives of civilians.A FEW MINUTES AGO , the
Israeli asked the people of Al Bustan village in the south to evacuate their homes. I am afraid massacares will keep happening as long as Israeli actions are uncheked. Please help us if you can
Hanady Salman"