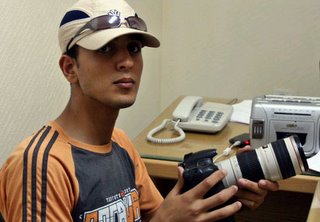 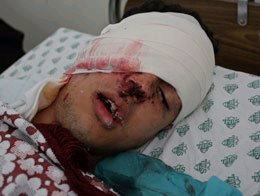 Mohammed Al Zanoun, 20, is a new photographer with Maan.

"The young photographer was seriously shot and injured by shrapnel from Israeli projectiles. One hit his mouth and teeth and cut his finger. The other hit him on his body. In spite of that, he continued to work, strangely insistent. Then the Israeli soldiers aimed their weapons directly at him and shot him in the stomach. He fell instantly to the ground with his camera."

Ahmad Abu 'Amsha, 17; Ahmad Shbat, 18; and Farid Mahfouz Nasser,19, and a fourth youth were attacked on a playing field.

"Witnesses affirmed that an Israeli aircraft fired a missile at the boys while they were playing football, killing three of them and wounding others."

An Israeli army spokesman announced today that "the army intends to increase the firing of tank shells and missiles during the coming week," however the Los Angeles Times,and other western media will report subsequent Israeli "intelligence" reports that the Palestinians actually murdered themselves in their own homes. And really, in the sage words of Milwaukee's finest, Golda Meir, if the Palestinians loved their children more than they hated us, we could finally forgive them for causing us to kill 1000 kids since September 2000.