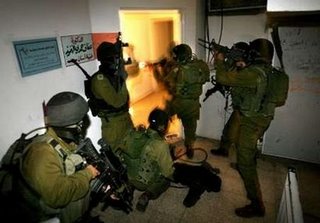 No joke. The caption calls these thugs raiding an Islamic Charity 'elite.' Don't they look stupid? The IOF, you know that outfit to which our fair boy, the world's sweetheart, Gilad belongs, ransacked an Orphans' Society yesterday also. I just refuse to believe that Gilad would take part in any of these kind of activities. Tore up furniture, confiscated computers, broke down doors. Zionism is so pretty.