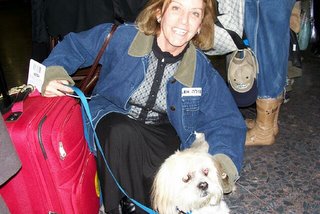 But I will not rest, I shall never settle
for the injustice my people endure.
Palestine is our land and there we'll remain
until the day our homeland is secure.

And if that time shall never come,
then you will never see a day of peace.
I will not be thrown from my own home,
nor will my fight for justice cease.

Olehgirl, transplant from Alabama writes on her personal blog:

While Lisa has a hissy fit

Actually, frank lee, the only thing that's tiresome around here is YOU. I think we all understand your agenda point. I also think that Yael has been remarkably patient with you, but I am really sick of seeing you trying to turn her personal blog into your own political sounding board.

I think it's time for you to get on your broomstick and fly off to another part of the blogosphere. I'm sure there are puh-lenty of bloggers out there who would love to go a few rounds with you - bloggers who are as dogmatic and disengenous as you are.

Because Frank Lee dared to "politicize" the sanctity of Olehgirl's "personal" blog. Poor Frank had the audacity to question oleh girl's giggling about and posting an IOF propaganda story claiming this video was a faked Palestinian funeral used to bolster the death count of Palestinians in Jenin. Of course neither Frank, Olehgirl, nor Lisa knew that the IOF story has been refuted (see update below).

But why is Frank Lee "dogmatic" and "disingenous" in the Canadian transplant Lisa's eyes?

He said At least 52 Palestinians were killed in Jenin. Keep giggling

and he said Why are the Palestinian combatants called "terrorists" while the IDF are called "soldiers"?

Olehgirl denied that IOF soldiers ever intentionally kill civilians: Because when an elderly person gets shot because they happen to be in the close vicinity to someone who is shooting at and otherwise attacking the soldier that does tend to be called an accident --in other words, the bullet aimed at the attacker missed the target and unfortunately hit someone who was not attacking.

And Frank Lee has the number of these toxic Zio babes. In response to Lisa's admonishment to him to "get on his broomstick and fly off":

You got it. Me, on my broomstick, you in your Apache. Enjoy your next airstrike.

Zionism comes in many forms, but none of them are "moderate."

A wise lawyer for the teachers' union once told me, "Don't help administration get rid of another teacher. They don't need your help. They have all the power."

Just like the Zionists. The Zionists are well armed, well organized, highly funded, highly publicized, and highly intelligent. They don't need our help to sell their product. Don't be taken in my brothers and sisters. Remember we are supported by the Universal Declaration of Human Rights.

We have the beauty of justice working for us and no need for toxic Zionists who come both in sheep's and wolf's clothing. For beauty check out these young men (scroll down to "Look into my Eyes" video on the page) singing movingly and beautifully for the oppressed, not trying to manipulate, nor trying to denigrate them or their proponents.

UPDATE (thanks treeplanter): The "faked" Jenin funeral Olehgirl found so hysterical was acutally Palestinan film producer "Mohammad Bakri, who was shooting at the same site." Read about it here.

Comments:
When a toddler, it was discovered that Aliyah Boatwright’s heart was severely damaged, necessitating an organ transplant. Six years later, a degenerative condition affected Aliyah’s coronary arteries and she underwent another transplant. But all of this has not dampened Aliyah’s spirits or taken away her desire to help her mom. Suffering from symptoms similar to her daughter’s, LaNaye had a heart transplant in December 2004. Aliyah gives her mom advice and watches over her knowing what it is like to have another chance at life.
----------------------
Shanon