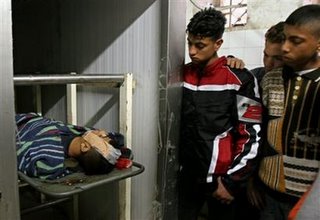 Amer Basiouny, May his memory be eternal

Amer Basiouny, fifteen years old was murdered while standing on top of his roof in Al Ain refugee camp in the wee hours of Friday morning. Googled his name on the google news search. No news. Googled his name on the yahoo news search No news. Googled his name at the BBC Middle East News Page...same old lousy, predictable story. AP now has a story up which does little more than provide his name but actually carries the headline Israeli Troops Kill Palestinian Teenager. As usual, the mainstream press is turning out predictable headlines regarding what Hams refuses to do.

Write your congressman every day that another son of Palestine is murdered by the brutal occupiers. We're paying for these war crimes. Let's put an end to it.