Meanwhile in Palestine: Soldiers Chase Shepherds Out of Their Fields 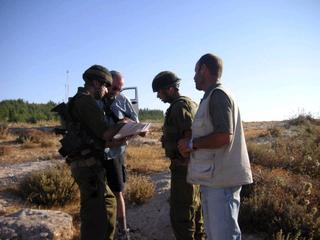 At 7:30AM, 1 August 2005, Israeli soldiers drove up to Palestinian shepherds in their fields in Khoruba, near the Palestinian villages of At-Tuwani and Mufukara, and beside the settlement outpost of Havot Ma'on. A Palestinian man from At-Tuwani showed the soldiers a map depicting the areas in the region that are closed military zones, where it is forbidden for people to go. The area that the shepherds were grazing their flocks in is not a closed military zone. The map was given to the Palestinian by his lawyer, who received the map from the Israeli military.The soldiers took the map and went to speak with a Ma'on settler security person. The soldiers then told the Palestinian man to move the sheep from the valley, and the soldiers ran down the valley to chase the sheep, cocking their guns to scare them. The shepherds moved the sheep to the top of the hill. After half an hour the military and settler security vehicles left.

At 9 AM the Israeli military commander for the region came back with the map to speak with the shepherds. The commander said: "This map is bull----! It's not signed. It's not from the army. The area is in the courts, until the courts decide what to do it is closed for everyone." The commander then ripped up the map. The shepherds were moving their sheep back to At-Tuwani, but the soldiers continued to chase and scare the sheep. One Palestinian man from At-Tuwani shouted and tore his shirt in frustration. Three soldiers grabbed him, forced him to the ground, and kicked him in the abdomen and legs.CPTers Mary Yoder, Diane Janzen and members of Operation Dove (Doves) documented the incident. When Janzen shouted at the soldiers, "Don't use excessive force. I'm taping you; the media will see this," the soldiers released the man.

Photos of the incident are available at: http://www.cpt.org/gallery/view_album.php?set_albumName=album127